Hi everyone, as you can see by today's post, I am doing a blog tour. This tour is organised by Lola's Blog Tours and it is for the book Ullr's Fangs.

You can win the following prize (INTL): 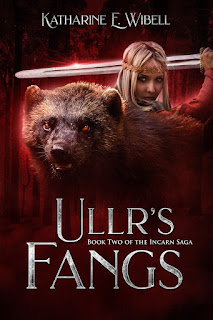 According to legend, when the world was young, two gods of war — one male, one female — were destined for each other. Yet Ullr, forever unfaithful, lost the love of Issaura, his true match, and was forsworn. His violent anger and bitter rage grew and intensified, poisoning all creation and humanity.

Now that the Raiders’ long ships have faded from sight, the kingdom of Elysia is beginning to recover from the summer’s war with the brutal invaders from across the sea. Yet darker forces have taken root, forces that can alter the future of the land and its people in unthinkable ways. Seventeen-year-old Lluava must discover the means to prevent her world from collapsing. But in doing so, will she succumb to that darkness?

Without moving, Lluava stared out at the stars and felt the cool touch of the breeze on her skin.
“Lluava.” The tenderness in Varren’s voice was something that she had been longing to hear. A smile slipped past her lips as he gently placed his hand upon her shoulder.
Then her anger seared up. Jerking her body away, she snarled, “No. I’m only your partner.” As soon as she said the words, Lluava regretted it. She never wanted to be the cause of the hurt that was written on Varren’s face.
“I’m sorry. I didn’t mean that.”
Running his fingers through his thick waves, Varren sighed. “I know what you want. I feel the same way. But right now, I cannot give that to you.”
Lluava made no move to respond. She watched as the loose curls fell back into place over his forehead.
“I am still betrothed to Illia. Until I have publicly nullified that arrangement, I cannot pursue any interest I have in you other than our military partnership.”
“Will that happen tomorrow? At court?” Lluava questioned hopefully.
“I fear not. This is a delicate manner. No betrothal has ever been revoked. I will not allow Illia’s reputation to be marred by this act. Though both she and I want to be allowed to follow our hearts as common people can, I must deal with the High Council as well as my grandfather. This decision will have repercussions. The whole culture of our matchmaking will change. I have to approach the situation with care.” Varren implored her to understand.
Lluava had not considered the implications. The situation was completely unfair. He was the prince. Why couldn’t he just say he was through and that be it? Why was it so complicated?
To hide her disappointment and her longing, she walked out onto the balcony. Pretending interest in the glowing city below, she concentrated on steadying her breath. When her eyes teared up, she clenched her jaw. Why was she being so foolish? She was seventeen, old enough to act with a level head. Besides, Varren had said he would be with her. She just had to wait. Yet patience was not an attribute for which she was known.
Soft footsteps approached behind her. Lluava’s heart picked up its pace. She felt herself tense and focused her attention on a distant lantern on one of the buildings. She felt Varren’s presence before his touch. Strong arms wrapped themselves around her, pulling her body close. Lluava willed him to hold her tighter. She could feel his heartbeat against her back, the warmth from his skin, his soft breath on her neck.
They stood for a time, Lluava afraid to move and end the moment. Turning her head, she looked at Varren, to memorize every detail softly illuminated by the moon. Dark hair framed his strong yet gentle face; kind blue eyes sparkled like the stars above; her eyes traced his perfectly shaped nose and softly smiling lips. Lips that parted slightly and slowly moved toward her. Stopping so close that Lluava heard the catch in his breath.
Leaning upward, their lips met, fitting perfectly with one another. A warm, tingling sensation coursed through both with their touch. It was so simple, so wonderful. When they parted, Lluava felt as if she were in a dream. There was something surreal about standing so close to this man, her prince, her partner, her….
“Lluava.” Varren breathed her name as if he, too, were testing the reality of having her before him.
She looked into eyes that were filled with unspoken emotion. Finding no words, she waited until Varren could continue.
“I want you to know how much you mean to me,” Varren said, her hands in his. “We will be together.”
Smiling at each other, they leaned in once more.
There was a sharp knock on the door. The mood was shattered. Varren quickly stepped back from Lluava, yet his hand lingered long enough in hers to convey his disappointment.
She watched the formal expression slip back over Varren’s face. Until he nullified his betrothal, this was the last time she would experience his embrace. Lluava could not help but loathe the steward’s interruption.
From the doorway came the hollow announcement, “The king will see you now.” 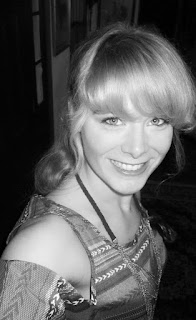 Katharine Wibell’s lifelong interest in mythology includes epic poetry like the Odyssey, Ramayana, Beowulf, and the Nibelungenlied. In addition, she is interested in all things animal whether training dogs, apprenticing at a children’s zoo, or caring for injured animals as a licensed wildlife rehabilitator. After receiving degrees from Mercer University in both art and psychology with an emphasis in animal behavior, Wibell moved to New Orleans with her dog, Alli, to kick start her career as an artist and a writer. Her first literary works blend her knowledge of the animal world with the world of high fantasy.