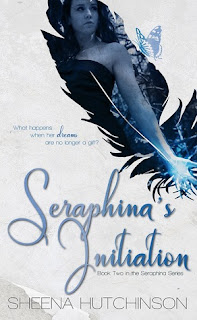 Seraphina Cross is unexpectedly thrown into this crazy, spiritual world of Angels versus Demons.
Never did she expect to meet Nate who was just a figment of her imagination. Now she finds herself moving in with him because of her innate responsibility to protect her loved ones from harm. Finally beginning to feel at home in her new house and with her new relationship. Nate begins training Sera in all that she can do, surprising even himself at times.Just when she is starting to feel safe and powerful, Lucifer finds a new way to attack her at her most vulnerable.
When her dreams are no longer a gift, can Sera control the powers needed to defeat what's coming before Lucifer fulfills his promise to her?


Jack
Something happened. I can feel it, the evil. His senses are overwhelming right now as he dashes out of the shop. He doesn’t care what Sera said; he can’t just let her blow him off like that. He loves her. He wishes he didn’t, he wishes it was someone else. But unfortunately, Sera is all his mind can think about day and night.

He’s running down the street in the pouring rain, but he’s determined to figure out what is going on around here. She must care about him. She came to him! On some level she has feelings for him, too. Maybe if she can see how much Jack’s willing to go through to protect her, if she can only see what he would do for her, then she will realize she made the wrong choice.
Jack is getting closer. He can feel it; the evil. It’s all over this place. Well, that’s different – Mr. Green’s Supermarket. He pauses before rounding the corner toward the entrance. Deep down he’s hoping that whatever was here is gone. If having the sight has taught him anything, it is not to be afraid of the unknown. He just hopes that whatever it is will see him as one of their own and mean him no harm. It’s his only hope as he turns the corner.

Correction, it was his only hope. Looking at the sight in front of him, all Jack’s hopes and endless dreams have just been washed down the sewer with the rain. She’s standing there, her arms wrapped around him with her hands on his face, kissing him like the barista has always dreamed about.

He must be in shock. He can’t seem to move a muscle. Maybe he’s a masochist because he continues to just stare at them flat out making out as if they were in some corny movie right there in the supermarket parking lot. How could she do this to me? Right here? Flaunt her choice right here out in the open for all to see? The anger grows inside of him. It ignites something in him and it begins to spread its way through his veins and envelopes his entire body. His heart turns cold as stone before finally turning and walks back toward the coffee shop. She will regret this – she will see she made the wrong choice. Jack wants here to feel like he does right now in this very moment. Yet, there is something inside of him that doesn’t want to give up one her. He’d still do anything to have her. Anything. Maybe, it’s time he places a call. One he had been avoiding. It’s time he has her.

I hope that you enjoyed that excerpt!