Keeper: The Book of Aon Review 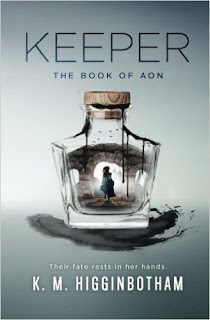 When Elizabeth Knight meets a boy with a peculiar book on the streets near her apartment, she gets a little worried.

When she wakes up the next morning in a totally different world, she starts to question her sanity. Elizabeth is whisked away to Aon, a kingdom of danger and muster, with Edwards, the bay from the streets.

Turns out, he happens to be the prince. And that makes her a target by association. Before night falls, the peculiar books hers, she is being called the keeper and she has a new enemy: the dark hooded figure called the Night Rider, who wants nothing more than absolute power. Now the only things in his was are Elizabeth, her book and the boy from a secret place.

As impossible secrets unravel, Elizabeth is faced with saving the kingdom and protecting herself, knowing that on accident could send her spinning through darkness, leaving Aon behind forever.

I am pretty excited for this book. My friends and I are reading this book for our January book of the month for our book club, To The Stars. Kate was kind enough to send us all copies of her book to review. The book sounds really interesting! So I can't want to see how it unfolds.

Please beware that in no way has reviving this book impacted my opinion. I received this book in exchange for an hones review

I had no idea what to expect from this book. But I was taken by surprise when I stared to read the book. The writing is quite unique and something I expected to read. At first the writing was not to my taste but as I continued reading the pages, I found it quite delightful.

However with that being said, there were small unnecessary comments made at random times throughout the book. They were pointless in the sense that they were obvious and there was a constant rehash of what had just happened, a page after the incident occurred.

The plot unfolded steadily. It was a slow paced novel that just seemed to fly by. I would say that sloth the Night Rider was a key driving force, Elizabeth's relationships are what spurred the book onward.

In the beginning, I really didn't like the story. The critic in me was judging everything because it wasn't something that I had seen before. But I took a moment to reassess how I was going to review the book and that was where I found the problem. I was reading this book for the review and not for pure enjoyment. Once I let that mindset go, I really began to enjoy the book. I shed a couple of tears, laughed a couple more times and swooned all the time.

I love how unique this book is to Kate. it's not something that I have ever read before and to be honest, I quite enjoyed the experience.

Elizabeth was what one might have called a feeble character. She was someone who was easily spooked and extremely lonely. However she is one character that experienced some major character development. If you put Beginning of the book Elizabeth and End of the book Elizabeth together, they would totally fight it out. Elizabeth experiences a version of her own utopia in Aon and whilst staying there, she finds everything she ever needed and wanted.

Ed is the cutest little kid ever. He was always kind to people and he supported them in any way that he could. He was hardly ever impatient and I really enjoyed his character. He really was a spark in this story.

Joey/Joseph can probably be best described as Ed's opposite. Whilst he isn't entirely opposite to Ed, he does have a few opposing qualities and well as different qualities. He was totally swoon worthy, a real people's person. He understood what people wanted. He was a true leader.

Overall, I was pleasantly surprised by this book. I thought I would enjoy it but not much this much. I would recommend this book to people who would want something out of the norm and who just want to relax and read. I loved this world and hope that I can continue on with Elizabeth's journey soon.