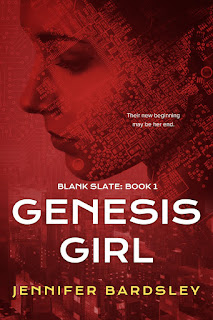 Eighteen-year-old Blanca has lived a sheltered life. Her entire childhood has been spent at Tabula Rasa School where she's been protected from the Internet. Blanca has never been online and doesn't even know how to ext. Her lack of a virtual footprint has made her extremely valuable and upon graduation Blanca, and those like her, are sold to the highest bidders. Blanca is purchased by Cal McNeal, who uses her to achieve personal gain. But the McNeal's are soon horrified by just how obedient and non-defiant Blanca is. All those mind-numbing years locked away from society have made her mind almost impenetrable. By the time Blanca is ready to think for herself, she is trapped. Her only chance of escape is to go online

I remember all the hype surrounding this book and just knew that I had to jump on this band wagon as soon as I could. I have to read this book in order to complete a blog post that I will be doing for the  Damaged Goods Blog Tour.

Please note that I have received this book in-exchange for an honest review. In no way has receiving this book affected my opinions. All opinions of the book are my own.

The writing in this book is logical and simple, which I think really lends to the story. Out character has a logical approach to life and every now and then there is a little 'flash of color'. I really enjoyed the simple, easy breezy approach to the writing. It made things easier and quicker to read. Although I enjoyed it, I found that the writing did get a little tiring and I would have liked if there was more description and just... more.

I really enjoyed the plot. The idea behind the story is quite interesting. Whilst I did enjoy the plot over everything else, I did find it slightly bland in some situations and thought that some areas could have been more developed and explained. I, personally, would've preferred if we got to see what type of education Blanca got at the institute of Tabula Rasa School. We get told what sort of education and repercussions the students get but I would've loved to see it.

I felt as if Blanca's name said everything. She was a one dimensional main character who is was almost completely subservient. However with having such a blank canvas, there are so many possibilities that can be explored in her character development. Unfortunately all these endless possibilities weren't explored and the character development was almost next to nothing. I felt that the one dimensional character really impacted the story by making it feel forced and on some occasions it felt as if Blanca was more a side character than anything else.

The only character that seemed to be a bit more complex was Fatima and she was rarely in the story. The other characters were however slightly less one dimensional. I don't know if the one dimensional characters are a product of the dystopian world where you are either addicted to technology or you are a Vestal. I really did hope for more character development.

Overall, the story and the book in general wasn't too bad. It was still an enjoyable read. I enjoyed it but not as much as I thought I would. I do, however, wish to see how the story progresses from this point and thus I will be reading the sequel for both enjoyment and to fulfill my obligations to the Damaged Goods Blog Tour.