Oh my gosh. This is one of those reviews that used to be on my old blog, back when I was super descriptive and trying sell something that wasn't really me. It might not be the best thing ever... But here we go... 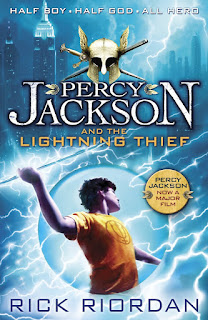 Goodreads Synopsis:
Percy Jackson is a good kid, but he can't seem to focus on his schoolwork or control his temper. And lately, being away at boarding school is only getting worse—Percy could have sworn his pre-algebra teacher turned into a monster and tried to kill him. When Percy's mom finds out, she knows it's time that he knew the truth about where he came from, and that he go to the one place he'll be safe. She sends Percy to Camp Half Blood, a summer camp for demigods (on Long Island), where he learns that the father he never knew is Poseidon, God of the Sea. Soon a mystery unfolds and together with his friends—one a satyr and the other the demigod daughter of Athena—Percy sets out on a quest across the United States to reach the gates of the Underworld (located in a recording studio in Hollywood) and prevent a catastrophic war between the gods
Book Synopsis:
Percy Jackson is about to be kicked out of boarding school... again. And that's the least of his troubles. Lately, mythological monsters and the gods of Mount Olympus seem to be walking right out of the pages of Percy's Greek mythology textbook and into his life. And worse, he's angered a few of them. Zeus's master lightning bolt has been stolen, and Percy is the prime suspect. Now Percy and his friends have just ten days to find and return Zeus's stolen property and bring peace to a warring Mount Olympus. But to succeed on his quest, Percy will have to do more than catch the true thief: he must come to terms with the father who abandoned him; solve the riddle of the Oracle, which warns him of betrayal by a friend; and unravel a treachery more powerful that the gods themselves.
Review:
The Lightning Thief... a novel about someone who stole a lightning bolt but not just any bolt; Zeus's master bolt. And whatever you remember from the movie if you've watched it... Forget it. Trust me... The movie is perfect for those who will never read the book... But for us booklovers here... It's torture. But this review is not about the movie, but rather about the compelling novel behind the major action film.
Young Percy, at the age of twelve, is a son of a god but not just any ordinary god with some weird and wonderful power that no one quite understands. Percy is Poseidon's son and only heir. The novel first draws in its audience with the chapter titles. If that didn't catch your attention then the first line of the chapter will. The 375 pages of the book seem to run out as you start. Time seems to elude you as you read the action filled novel by author, Rick Riordan. Percy must embark on a quest that will change the way he views the world forever. Percy’s journey will determine the future of the modern world. The books is based on Greek mythology, which plays a massive role in the plot and the development of the book. The series is now considered a middle-grade but is a perfect read for anyone who reads it. The entire series is written in Percy’s point of view and is in first perspective. Percy is the main character but Annabeth and Grover are the main supporting characters. Rick Riordan is the author of the New York Times #1 bestselling Percy Jackson and the Olympians series. The series consist of five books. The series was published by Hyperion Books.
Percy Jackson is a beautiful character who seems to relate to just about anyone. Percy seemed to appeal to our inner adventurous child. He is a lot like boys at this age, angry and confused and felt realistic. He is dyslexic and ADHD but it just adds to the flow of the book and the actual content. Grover however is completely different from the movie in terms of description and timing of appearance. The mom however acted different than most mothers would but that is up for debate. My favourite character would have to be Annabeth. She has an interesting perspective and one can see she doesn’t really get to see the real world outside of Camp Half-Blood.
At no point in the book was there confusion, it is understandable and had a wonderful flow. The introduction was wonderfully executed and hooked you into the compelling books immediately. There wasn’t a stone left unturned. It was filled to the brim with action that got you anticipating the next butt-kicking scene. The pages felt like they merged into one and did not let you go until you had the will power to retract. Throughout the book you uncover plot holes that the movie had, leaving one completely shocked. I enjoyed the book through the small arguments that Annabeth and Percy had to the encounters of the monsters. I would highly recommended this books to anyone.