Cookbook of the Dead Review 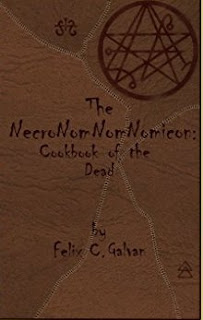 The Harrison family is dragged into the bizarre world of the supernatural as they become pawns of the Cookbook of the Dead, in its bid to bring on its supernaturally flavored apocalypse. Boy, the family dog struggles to keep his family out of the Frying pan AND the fire as he defeats the Cookbook's minion along the way.

I have no idea what to expect from this book. I read the synopsis and that this will be an interesting read. I suppose I will see how this unfolds, one page at a time...

Felix has an amazing talent of taking existing words and creating new ones to aid him in his novel. Although I found it quite funny, it was distracting for someone like me. I kept attempting to read the word and placing the original in its place, making me read the sentence a couple of times. This made reading the book really difficult.

Another thing that made this book really difficult to read was the different point of views. The book felt more like a screen play than an actual book. The fact the book is in third perspective really helped but it just felt all over the place. I would have preferred if the different point of views were separated by chapters or were a bit longer than what they actually were

I have to admit, the plot is really unique. The idea of having a demented cookbook tormenting people is pretty entertaining.

I really enjoyed that Felix opened with an introduction made by the cookbook and then an action filled scene there after.

The story took a while to warm up to the main event. I also think that the blurb is a little miss believing. Whilst it indicates that there is a cookbook and Boy, the family's dog, all the things mentioned a long time before it all happens. There are also other things, in the book, that I think are worth mentioning in the blurb. Like the cooking show. I think that would've played a really nice role in the blurb

Boy is probably one of my favourite characters. He is also the protagonist of this story but it does seem like it. He might be a fog but he is a charter to aspire to. He is super brave and does bite of more than what he can chew. He is loyal to his family and is probably one of my favourite animal companions in novels, second only to Gus in the Halfway Witchy Series.

I found that the other characters were bland or a bit too unnatural for my tastes.

Overall, this book is not something that I expected. Will I read it again, probably not but there is a slight probability that I might pick it up in the future. I might not have enjoyed the book but perhaps others will. This book is definitely for those who like reading books that twist the norm.