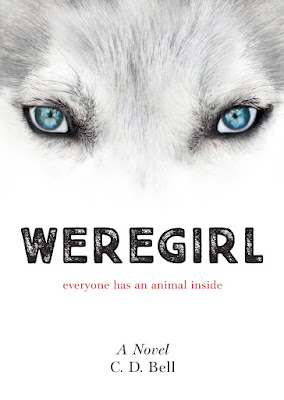 Nessa Kurland is running for her life.

C. D. Bell's WEREGIRL is a fast-paced teen thriller set in Tether, Michigan, a town on the brink of shutdown since it was stripped of its resources by corporate polluter Dutch Chemical.
High school junior, Nessa Kurland, is a cross-country runner with her eyes set on one thing: a college scholarship as her one-way ticket out of Tether.
Talented teammate Cynthia Sinise invites Nessa on a nighttime run through Tether's overgrown forest trails. But she speeds ahead, leaving Nessa alone to discover a trapped wolf. Nessa tries to free the animal but is badly bitten, seemingly ruining her hopes for a strong fall season with the cross-country team.
Instead, Nessa's freakishly quick recovery is followed by improved running times. All her senses are heightened. Nessa has transformed.
She has become a werewolf.
In her new state, Nessa learns there are things about Tether that powerful people want to keep hidden. Why does a Nobel Laureate work at the small-town medical clinic? Are top college athletic scouts really interested in her emerging talent? Can she trust Chayton, the motorcycle-riding guide her friends have faith in? WEREGIRL's Nessa must navigate her junior year and true human darkness, while making peace with her new, wild nature.

I received this book for an honest review on NetGalley. And then on about a couple days after I received the book, Chooseco contacted me to ask if I was willing to do a post for the blog tour. I signed up thinking that it will be a great idea. So here we are today, rushing to complete this on time. Moving swiftly on to the actual points I have for this post… I saw this book receive a lot of hype from lesser know bookstagrams and just knew that I had to pick it up. I was also so keen to read this book because it had been quite a while since I had actually read a werewolf book and a good one at that. I was also pretty keen because it is the season for paranormal reads. Just in case you don't know how I review books, I like looking at the writing style, plot, characters and then I do a kind of a final thoughts and how much I liked the book.
The writing was super easy to get into. The register of the book was formal but wasn't too difficult to understand. The words used are simple and uncomplicated making it one of those books that anyone can read. The overall tone was emotive because our main character is softhearted and wears her heart on her sleeve. The style of the book was descriptive and it often felt like I was experiencing the situation as Nessa. The sentences of the book was well structured which made for quick chapters and and a really great flow to reading the book. The writing also felt like it was well thought through. I can definitely see the effort the author made to make the book easy to read and to make it a good book.
The plot was refreshing and stepped away from the tropes that often come with werewolf books. Some werewolf stories rely so much on the main being either a werewolf or a mate of one and then they would have to be transformed into a werewolf for their own protection. I also loved how there were subtle changes in Nessa’s transformation and it wasn’t just a sudden “oh look I’m a werewolf now”. The plot of this book was entirely uniques and different from all the other werewolf books I have read. And another thing that made this book easy to read was the simplistic plot. It wasn't predictable and I was sitting on the edge of my seat getting ready to see what was on the next page.
Nessa is a stubborn but driven character who knows what she wants and goes for it, giving it her all until she has accomplished it. I do think that sometimes she does stupid things because she is so determined but it plays quite well into the story. I rather enjoyed the fact that her ambitions were made clear from the start and we weren't playing a guessing game. That is what made the beginning of the book so good for me. There are some plots that lend themselves to the guessing game, but with Nessa being so straight forward, the fact that her goals were presented in the beginning definitely lended itself to this specific story. I enjoyed how motivated and how Nessa persevered to get where she was and how she just kept going. Nessa is definitely throw some bad luck in so many situations and I think it is pretty incredible how she still finds a a type of energy in her to just keep going in each of these circumstances. Nessa is incredibly compassionate and caring. She looks after her brother and sister while her mom is out working. Even though we don't see a lot of Delphine (Nessa’s sister) we can see the supportive relationship the whole family has.
Bree, Nessa’s best friend, is super supportive and sweet. But she is also funny and sarcastic which makes her super accessible to me because I am so similar to her in so many aspects. She and Nessa are complete opposites in terms of personality but you can see how deep the friendship runs.
In conclusion, the story is really good. It has a strong beginning, middle and end. I really enjoyed how prepared Nessa’s family was willing to do things for the other. They just understand how hard it si and just want to minimize the hardship that they have. This is one of those must read werewolf books. It’s one paranormal book you don't want to miss.

About C. D. Bell:
When she's not biking the streets of Brooklyn, NY, you can find C. D. Bell writing in a decrepit RV clinging to the side of a hill in upstate New York, trying to teach herself to watercolor, or inventing her own recipes. She is a voracious reader of anything and everything fantasy, supernatural, or romance. And she swears that the monsters she often writes about are not real-- at least she hopes not.

About Chooseco:
Chooseco publishes the Choose Your Own Adventure series. Widely commended for its appeal to reluctant readers, the interactive, multiple-choice multiple-ending series is the 4th-bestselling series for children ever published, with more than 265 million copies translated into 38 languages. Chooseco has sold over 10 million copies since the series re-launch in 2006. Weregirl represents Chooseco’s first foray into full-length, non-interactive young adult fiction.


Created by a talented team of six female writers and inspired by the working tradition of television writers, C. D. Bell is a Chooseco author pseudonym developed with teen author Cathleen Davitt Bell, who has written I Remember You [Knopf 2015], among other novels for young adults.
The second installment of the WEREGIRL trilogy is already in the works.