Storm of the Gods Blog Tour

Hi guys! As you can see, today I am participating in a blog tour hosted by Xpresso Book Tours for the  book, Storm of the Gods. 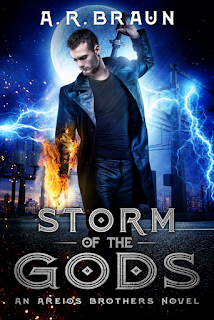 Thirty years ago, the gods of Greek legend returned to the world. Their return restored their powers, which had been spent in a cataclysmic battle with the Titans. With the ancient deities imprisoned in Tartarus, the Olympians now reside in Néo Vasíleio, formerly known as California.

Twenty-four-year-old Derek Aerios is a war scion, a descendent of Ares, the God of War. He and his brother, eighteen-year-old Liam, capture mythological creatures and rogue scions as part of Ares’s elite military force. As he struggles to cope with his violent powers and the scars of a traumatic childhood, Derek tries to keep the two vows he has made: protect his brother, and never kill a human again.

But when Ares forces him to hunt and kill four rogue scions under Athena’s control—by threatening Liam’s life—Derek chooses to go after the scions in order to save his brother and keep his promise to himself.

Yet the closer Derek gets to the scions, the more he realizes that his orders are part of a deeper conspiracy that put him at odds with his mission and his conscience. Athena may not be the enemy, a traitor could be in their midst, and the Titans could be closer to freedom than ever before.

I love Greek gods. I adored the Percy Jackson series and I am so excited about this book.

Thank you so much to Xpresso Book Tours for providing me with a copy of this book. Just a small disclaimer for those reading this review. I have received this book for free. Please note that this does not affect my opinion in any way. All thoughts are my own.

I liked the writing in this book. It was full of detail from character descriptions to the surroundings. I really enjoyed this. I also enjoyed the dialogue, especially between the two brothers. I enjoyed because the writing really carried their bond quite well and it also showed their individualism. The writing, however, did get a little heavy sometimes.

I really enjoyed the plot. It was full of action and questions and Greek mythology. I thoroughly enjoyed it. I also really liked how the author took the mythology and made it into something of her own. The one things I found to be a little time consuming was that there were a lot of scions who could do different things within their own groups. This made things a little difficult to keep up with. However, I really enjoyed that we had the Beserking rage that added a little more tension to the plot.

I really enjoyed the cast of characters. I felt like we really got to know the characters and that we also got to know Derek quite well. I liked how the book was told from his perspective because it added this edge of both urgency but also a lot of emotions.

Overall, I really enjoyed the story. I thought that it was interesting and had a different approach to scions. I liked how the writing was detailed but sometimes it was at risk of getting a little too heavy. The plot was crazy and exciting and really made me enjoy the story. I also liked the cast of characters that added a nice flare to the story. Thank you so much to Xpresso Book Tours for providing me with a copy of this book! 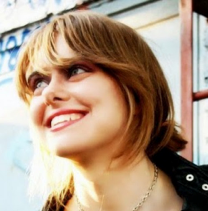 Amy is a Canadian urban fantasy and horror author. Her work revolves around monsters, magic, mythology, and mayhem. She started writing in her early teens, and never stopped. She loves building unique worlds filled with fun characters and intense action.