Hi guys! As you can see, today I am participating in a blog tour hosted by YA Bound Books Tours for the  book Her Revolution. 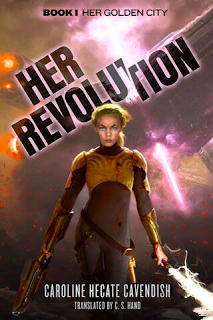 
When a minor incident of insubordination at an exotic vacation city turns out to be the first tremors of a revolution, Castillia turns to its eleven-year old military prodigy Innocence and her loyal Guardians for help.


Castillia has enemies, that’s for sure. But who is fomenting this uprising?
Sedition is an old trick the southern Republic, Ausonia, with its towering obsidian pyramids, is typically fond of. In fact, the exotic city used to belong to Ausonia and they have always wanted it back.
But could they really organize such a revolt between all their dancing and drinking?
Or has Vesper, the mighty Republic to the North finally woken from its slumber? It has plenty of old scores to settle with Innocence’s City.
For Innocence, squashing the uprising could be the perfect way to end the most legendary military career Castillia has ever witnessed and begin a new, exhilarating life as a prominent politician. Perhaps the only politician in any Republic with the power to unite humanity and evacuate it from the dying planet.
But it also might just be the perfect way to start what she has secretly always yearned for:
her own Empire.

“As long as the enemy is not defeated, he may defeat me; then I shall no longer be my own master; he will dictate the law to me as I did to him.”
Clausewitz

When I was six I commanded the Sun Battalion to charge the center of Ausonia’s forces at Serenissima, the most beautiful and opulent city on this planet.
Every single man, woman, and child from that legendary unit died in the melee.
But it broke Ausonia’s center and then we out flanked them—on both sides.
Ausonians begged for their lives, but when you lose your Republic’s most famous battalion you cannot allow for survivors.
Even if you havejust stolen the jewel of cities from an enemy’s grasp.
When I was seven I saw my own army nearly overrun.
That was until I came out from my command hub and grabbed the banner from a fleeing Guardian and turned Lazarus on, then began sweeping through the enemy’s ranks with my sword of trembling lightning.
That was the first time I had ever been shot more than thirteen times.
When I was eight I had to execute my second-in-command for treason. We were low on ammunition and my lightning blade wouldn’t turn on, so I had to do it with a rock.
When I was nine I led a lightning-sabre charge straight into the heart of Vesper’s Hyper Accelerated Rifles.
Everyone but a child named Beatrice was mowed down.
But between myself and Beatrice and the second, third, and fourth fearless waves we cut them to pieces.
The problem with Hyper Accelerated Rifles is if they fire too fast for too long they overheat and then don’t fire at all.
That was not the first time I had killed defenseless human beings—and enjoyed it.
When I was ten I ambushed Jacob Heist and his band of outlaws who were traveling to various cities in the South preaching about freedom and liberation and brotherhood—the very ideals my City was founded upon.
They said we were the very opposite of those things and that we were what they called a “Dysotpia,” which is a new word used by uneducated thugs to incite rebellions against people like me.
When we ambushed them on the shore and they didn’t even try to run I assumed it was because they knew it was over.
They had no weapons but refused to surrender, even after I offered it to them a second time.
So we murdered the band of outlaws and searched for the weapon we knew we would find, “The Chariot Buster,” which they usually used to blow our ships out of the sky.
Heist and his gang loved to beam our hovercrafts into vapor, like he did the previous seventeen times we tried to ambush him. In fact, he did it so much, we called it “bait and beam.”
But all we found in his traveling caravan were hundreds of copies of an unsettling novel from some ancient planet about an elf and a minotaur who overthrow an entire world.
If that isn’t criminal literature worthy of suppression then I don’t know what is.
What I also didn’t know was that we were being recorded and streamed live over an inventive social media application called Periscope.
So it looked like I butchered a peaceful intellectual on a paradisiacal white sand beach in spite of his repeated cries for mercy and justice.
Blogs went crazy.
They reported that we murdered them when they were defenseless and did terrible things to their corpses.
What they didn’t mention is that my dogs were starving and that we had a long march back. We weren’t going to be the ones eaten alive.
Besides, you can’t take heavy machinery on an ambush.
The outlaw preachers would have heard us coming miles away.
So I had to take the dogs.
And the dogs had to eat.
There were hundreds of uprisings.
I crushed them all.
My City stood by my side. Esteemed Council members lost their seats because of me, some had attempts made on their lives, and some were successfully assassinated.
That’s when I learned someone can strike at you even from death, and when possible never turn an enemy, who is mortal and fallible, into a martyr, who is infallible and immortal.
I’m eleven now, and this is my last year as Commander.
After this year I will retire from my duties as a Guardian of the Republic, squelching rebellions from the other cities who never pay their tributes on time, are never fair in their dealings, and are always plotting against my perfect, beautiful City.
Oh, my name is Innocence—which as far as I can tell is just some made-up word. 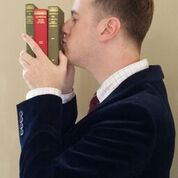