Hey everyone! Today, I have teamed up with the author, L.S. Johnson, to promote her new book! The pre-order links for Harkworth Hall have gone live and in the next couple of weeks, my review will go up! So be sure to be on the lookout for that!


P.S. Harkworth Hall ia available for the pre-order at the sale price of 99 cents! So be sure to pick it up!

If you liked the teaser, you can find the book and author with the following links! 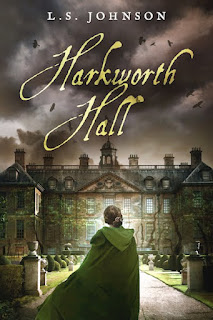 There was an awkward pause. I was trying to think of a new topic of conversation when Sir Edward suddenly spoke.
“It is entirely possible that this coastline is laced with underground waterways,” he said in a low voice. “Many do not realize just how much water lies within England’s green lands. They are the bedrock of English power, the very veins through which her lifeblood runs. We would do well to treat them with the respect—nay, the reverence—they deserve.”
His voice caused a hush to fall over the room. It seemed larger than the man himself; it seemed to come from both without and somehow within, as if he were echoed by a voice in my mind.“We first settled close to water because we knew its strength and power. Even now, our greatest cities are those clinging to the edges of rivers or seas, drawing sustenance from the water lapping at their borders. Our might in trade and conquest derives from this holiest of sources, and those who have devoted themselves to understanding its energies and its needs.”
He rose and held his wine glass, half-full, over the center of the table. In the candlelight, it seemed to contain patterns on its surface. I could not stop gazing upon it. Indeed, I felt myself leaning forward to see more clearly, and sensed the others do the same.
“From the mightiest ocean to the smallest tributary, all are ours by the grace of God,” Sir Edward continued, his voice low and melodic, almost as if he were singing. “Water is ours to master, ours to wield. But like any beast, we must treat it properly. We must care for it, and discipline it, or it will consume us.”
Upon the blood-red surface rose the shimmering outline of England and the roiling waters around it. As he spoke, the crimson sea churned and foamed, the waves crashing high upon the cliffs—
—and then the sea seemed to part, as if pressed apart by invisible hands, and there was something in its depths, something coiling and serpentine that rose up in a mass of undulating limbs and seized the whole of the island to itself—
—and then England was gone, drawn down into the wine with an audible splash.
At once the wine was merely wine again. The candles seemed to brighten, though I did not remember them dimming.
“Well said,” said my father. “Well said, indeed.”