Hey Everyone! In preparation for my marathon of the Faerie Trilogy by Patricia Bossano, I thought I would publish a small Q&A provided by Wildbound PR and the lovely Jenny that I am working with! But without any further delay, here is the Q&A!

1.     If you could sum up the single best piece of advice you’d want to pass on to other aspiring authors about writing a novel or trilogy, what would it be?

In early 2016, I had to step out of the corporate world and had to evaluate my next move. I took the path that allowed me to write full time and decided that no faery would be left behind. By October 2016 I tuned in to everything Nahia had to say, and by February 2017, I had finished transcribing her story onto 270+ pages.
My mother has 6 sisters and 3 brothers—all of them were devoted to my grandmother, had immense respect for my grandfather, and they are still very much about keeping the clan together. Our genetic bond is the lifetime membership to el correo de las brujas through which everyone knows everything—we ride the waves of our life, always with that third eye fixed on our performance. (Yes—it is both cool and creepy.)
I think faeries are due to resurface all over the planet as nurturing forces of creation and restoration. My troop of full-blooded and hybrid fairies is part of a worldwide movement to explore the new, unlearn some of the old, and carry on with heightened awareness.
The very wise Maya Angelou once said, “If you don't like something, change it. If you can't change it, change your attitude.”

2.     What challenges or fears did you face with writing and self-publishing Nahia and how did you overcome them? What did you find most rewarding about the experience?

I was over-confident with Nahia and I have my daughter to thank for setting me straight. I had outlined my chapters in advance, thought elaborating on them would be a piece of cake, so I rushed to voila, like a multi-tasking fool! (Then I read somewhere that multi-tasking is a myth, but that’s another story.)

I was working full-time at the onset of Nahia, plus I went through a divorce, and then my father passed away. Over those months, I thought of my outlined chapters only in passing, made notes half-heartedly, and let time go by. In 2015, I took a serious look at the manuscript and felt reassured that the outlined chapters meant it was pretty much done. I hastily fleshed out my bullet points and printed the 90-page rough draft, convinced I’d magically completed it. So I turned it over to my daughter to read (she’s featured on the cover of Nahia). She came back with some harsh, humbling criticism—said I wasn’t giving Nahia the time she deserved!

3.     You come from what you describe as a “matriarchal clan” of women—how did growing up in a female-dominated family influence your stories, characters, and overall inspiration for writing?

Although my matriarchal clan is spread over the Americas, we have a radar that allows us to know things even if they’re happening in a different hemisphere. It is not uncommon for someone, say, in Colorado, to receive a call in the middle of the night from someone in Ecuador asking “what’s the matter, I had this dream, or you popped into my head,” etc. Even though we have affectionately dubbed the phenomenon “el correo de las brujas” which roughly translates to “the witch’s postal service”, I chose to portray these women as faeries instead of witches.

4.     What message do you hope to advocate to readers about embracing the power of magic in their everyday lives?

Faeries use the energy in their bodies to achieve their goals (shape-shift, fly, defend themselves, make powerful potions, etc.) They channel their energy, infuse it with clear and present intent, and direct it to an object—a basic application of mind over matter. Studies abound regarding the effect of positive/negative thoughts on the cells of our bodies. Happiness, Anger and Sorrow, trigger a chemical reaction within us, which we then project to the outside—this is scientific magic!  I see it linked directly to ATTITUDE. Attitude is the ultimate power, the ultimate piece of magic we have at our disposal. We can transmute just about anything with a simple choice: what will my attitude be today?
Circumstances are what they are, the road is what it is, people around us will be who they are. But how we choose to handle circumstances, or the road, or people, is key, and completely up to each of us! Believe that, and you’ll be on your way to becoming the best version of yourself. When we confront difficulty with a positive attitude, magic happens: our contagious, positive attitude can and will shift the energy around us! I strive to see the magic around me, even if all I get is a fleeting glimpse of it: in a smile, in conversation, in cooking, in music, in walking, in hugging someone—everywhere.
5.     Your book is very descriptive in terms of family history, character descriptions, and setting details—how do you come up with such a unique storyline that blends both fantasy and realism?

Candlelight triggers leaps of the imagination, and growing up in Ecuador, with regular power outages, I was constantly leaping. We are a vocal clan—we love to talk and some of our most beloved family tales are about “how” someone said something, how they replied or how they told a story—tone of voice, body language, etc., possibly because TV was not prominent in our lives (I was 8 or 9 when we finally got electricity at home) we’d gather around and hear the grownups talk. Like hens, the moms would want their chicks under their wings whenever possible. And from there, we’d listen to the funniest stories, or piece together juicy gossip the hens thought might be over our heads. This behavior trickled to siblings and cousins—the older ones told tall tales to the younger ones, who listened wide-eyed. Like a flickering candle distorts our shadow on a wall, so has fantasy affected the realism in my life.
6.     Are there any characters, events, or scenes in Nahia that were inspired by—or created from—memories of your childhood or your imagination?

The magic in Nahia and the other two is an amplification of the innate magic in all of us—while we might not be able to shape-shift and fly (yet) our spirit can certainly soar, filled with confidence. The bosom of the family is definitely a buoying, protective shield. The majority of characters’ behaviors and attitudes described in Nahia are based on real exchanges between the women and men in my family, with fictitious circumstantial brushstrokes throughout. For instance, my daughter has issues with aging, and ‘old’ people so naturally, Nahiadoesn’t understand why the humans she loves refuse to live in the realm of faery, where they can significantly reduce the aging process.
7.     What does the future hold for you as an author?

To continue writing. I want to be an inspiration to my children, prove to them and to myself that attitude = success (any way we’ve defined it) and be their support if they need me. I see myself contributing to the growth and progress of my family and extended community through new novels and literary programs (creative writing workshops, indie publishing projects, etc.) I foresee learning new tricks, for instance, screenplay writing. Talk about a dream come true—to one day be in a team of writers credited for wondrous, entertaining, inspiring work! 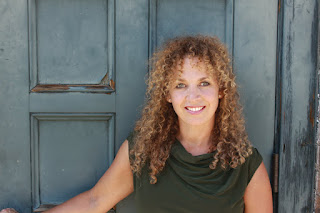 Award-winning author Patricia Bossano grew up in Ecuador, South America and moved to the United States in the mid 1980’s to pursue a career in International Sales, as well as work as a translator, interpreter and instructor in Spanish.
Over the years, writing continued to be Patricia’s main passion whether journaling, writing letters, short stories, and eventually, composing full-length novels.  Patricia published the first of the Fairie books in 2009, starting with Faery Sight (winner of the 2010 Golden Quill Award of Excellence from the League of Utah Writers), followed by Cradle Gift in 2009. In 2016, Patricia left the corporate world to follow her dream of being a full-time writer, allowing her to complete the third installation of the Faerie Series with the 2017 release of Nahia. The trilogy chronicles the history of a matriarchal faery family and serves as “a celebration of the relationships between mothers, daughters and sisters” within Patricia’s family.   Patricia is a full-time writer residing in Southern California.

Be sure to look out for my reviews for the Faerie Trilogy which will be available on the blog soon!