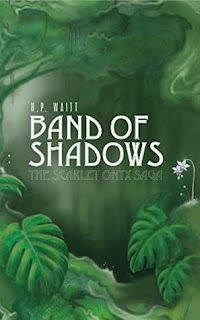 
Friendship and morality play a major thematic role in the book. Scarlet has to work on growing her confidence and inner strength, but she also has to learn to trust and rely on her friends. She has never known her family and has spent most of her childhood bouncing from foster home to foster home, so trust is a nearly foreign concept to her. Since Scarlet is uprooted from her normal life and thrust into the mystical world of Avalon, her coming of age story is quite tumultuous, both her strength and her morality will be tested time and time again. Luckily she has her friends, Stiles, Lena, and Ryker, who are a lovable mix of intelligent, loyal, and witty (often quite sarcastic) to show her the ropes.

There is also an underlying theme of turning your weaknesses into your strengths. When the book begins, Scarlet is in therapy for depression and anxiety, and she views the symptoms as a weakness. But in truth, the symptoms reveal her powerful abilities, and are actually her greatest strength. The message serves to not only turn weakness into strength, but also to de-stigmatize mental illness.

Where am I?
From where Scarlet was sitting, it looked like a rainforest. Beyond the vast expanse of grass, trees surrounded her in every direction. Green — the only color Scarlet could see, aside from the perfectly blue sky, was green. Scarlet had never seen so much green in her life, in every vibrant shade imaginable.
There were giant birds, no people to speak of, and not a man-made building or object in sight. Her head jerked around rapidly as the hot sun beat down on her. She couldn’t be anywhere near home. Scarlet thought perhaps it was an island or somewhere tropical. But how, then, had she gotten there?
The door.
She spun around. Where was the door?
She had opened a door in the city and, somehow, on the other side was a sprawling tropical oasis. And then the door had just disappeared as if it had never existed in the first place. POOF. Into thin air.
Scarlet screamed.
Where was Jensen when she needed him?She thought about Jensen as she catatonically pulled at blades of grass, letting them slip


lightly from her grasp, wishing more than ever that he were here to help make sense of it all. He would talk her through this. He would make her feel sane. At the very least he would add some comic relief to the situation. He’d probably be running toward the forest already, looking for pathways through the trees, shouting for people, being proactive. He definitely wouldn’t be sitting here like a lump in the grass doing nothing.
“Snap out of it,” she heard herself say aloud.
Some primal instinct took hold of her, forcing her to look for a way out, a way through the trees, a way to the door — anything other than sitting and waiting for something to happen to her.
The door hadn’t disappeared; that wasn’t possible. I must have walked away from it. Or I fell too far from it to see it. Things didn’t disappear. Inanimate objects didn’t move. She must
have been turned around in her confusion. All of her surroundings did look remarkably the same. A worrying realization struck her — it would be far too easy to get lost here.