Hey Everyone! As you can see, I am participating in a blog tour hosted by XPRESSO BLOG TOURS for the book, Long Live Dead Reckless. They have kindly provided me with a copy of this book to review. Please note that this does not affect my opinion in any way.

The following prize is what you could win (US/CAN) 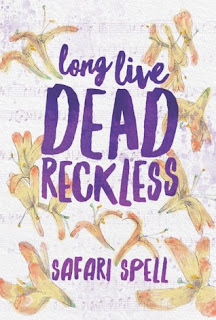 Talor Gardin may be a princess, but her life is no fairy tale.
A year ago, her mother died and her father burned down their house. Now with a father in and out of a mental ward, she’s working a minimum wage job to finish her last semester of college. To make matters worse, she gets itchy every time a guy makes a move on her. The itch could be anything, really: a desire to escape her haunted hometown, a financial windfall, the name of some vampire…or all the above. Whatever the reason, she thinks the answers are written in the freckle constellations of her cute new coworker, Sage Talis.
Sage is the quiet, polite type with plenty of secrets – like fangs and a price on his head – and Talor can’t figure out what makes him so irresistible until she hears him sing. But when cryptic letters appear on her wrist, Talor is thrust into a world where fantastic creatures lurk just below the skin, strangers keep calling her a princess, and everything she’s been through is nothing compared to what’s coming.

I gathered the layers of my dress and started walking. I passed the long row of cars lining the grand entrance and headed out onto the road. When I got far enough from the bright lights of the mansion, I realized I was on a dark road alone. As expected, I began to freak myself out. Had I just become that stupid girl in a horror movie? Why did I leave the safety of the gala?
I should have just gone back inside and waited for sanity to show up. Spencer was gone, but his car was still sitting in the driveway. He was probably laughing his butt off somewhere with Jesse. I started to wonder how bad a kisser I really was if he acted like it nearly killed him. Should I dare embarrass myself with Sage? And was I really a bad dancer, too? I ran my fingers along my lips as I pondered the whole thing.
I had plenty to think about on my lonely walk. It was a good thing, too, because the longer I traveled down the winding country road, the more I feared that Bex would forget to come get me or drive down the wrong street. She’d never been to Beaty Plantation before. I’d forgotten that not all my friends were friends with each other. The edges of my stilettos started to rub the sides of my feet raw, so I stopped to take them off.
As I bent down, I caught a whiff of something dead and had to cover my nose. I hoped I wouldn’t trip over a dead raccoon in the middle of the road. It wasn’t a good time for a twig to snap nearby. I tried to pretend it was a deer. I wasn’t about to start looking around for more eye shine. After all, it was the outskirts of the city, otherwise known as the country. There were plenty of fields and forests; protected places full of wild things because millionaires like to have miniature countries to lord over.
In an effort to lighten my mood, I escaped into childlike imagination. Maybe the deer and the road kill raccoon were old friends. Maybe he was coming to pay his respects. For safety’s sake, I hoped animals were that sentimental. I knew it was something else, but I didn’t look back. I couldn’t muster the courage.
I quickened my pace, knowing that if something strange was lurking around, it was going to have to work up a sweat to catch me. I was jogging a solid six-minute mile in my ball gown by the time Bex’s headlights were on me. I could hear her ridiculous cackle and blaring beats before I got in. She didn’t even try to suppress it.
“Takin’ a pleasure jog in your evening gown, Miss O’Hara? Aren’t you supposed to be sipping mint juleps or something?”
I slammed the car door and waved her on without answering. I was out of breath and sweating a little more than I wanted to in a silk dress and cinching corset. As I laid my head against the window, I caught the glimpse of something in the rearview. It was standing in the middle of the road where I had just been picked up. It looked like…
“Stop,” I screeched.
She slammed on the brakes.
“Ohmahgod, what?”
As we sat idling there in the road, I turned around; I’d seen something in the rearview. Something insane. Something my dad would have seen. It was gone now. What I saw, I didn’t dare say. It wasn’t real, but I was sure it was what had been following me.
I slammed down the door lock. I saw something that shouldn’t be there. Something that didn’t exactly exist. 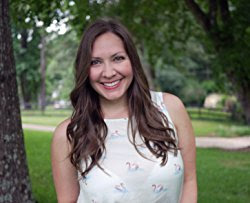 Safari Spell is a native of Albany, Georgia. She has a BA in Journalism from Valdosta State University. She currently lives in North Georgia with her husband, hilarious daughter, and a backyard jungle harboring all the dinosaurs everyone thinks are extinct. Her dreams include chasing autumn around the globe, owning a wallaby, and riding a camel for at least nine seconds.