I currently have a review up for Wrestling Demons if you are interested. You can find that review here.

This month, I will be featuring Jason Brick! I am extremely happy that he agreed to do the Author Spotlight!

Follow these links to find Jason on several sites!

But now it is time for the Author Spotlight! 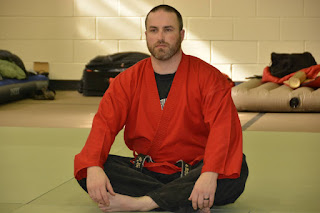 
I’ve always written. One of my earliest memories is being four or five years old, scribbling on a piece of paper and pretending I was writing the words and ideas in my mind.

If you could give any advice to a non-published writer, other than to just push through it, what would it be?


Go to conferences before you think you’re ready. This is very much a who you know > what you know industry, and there are a lot of misconceptions until you get involved in the industry. Besides, it’s really fun to hang out with other writers. Writing is a lonely profession.


I’ve always written, and it’s always been a part of my self-concept. I was told from an early age that I should write professionally, and had offers of mentorship from amazing people starting in middle school. So naturally I spent the first 15 years of my adult life doing something else. I started writing full-time after having my first child: I wanted a job where I could see him more often.

If you have done the Pottermore Houses test, what is your house?
I haven’t, but I’m going to guess Ravenclaw.

If you have done that Pottermore Patronous Test, that is your patrons?
It’s probably not an option, but I’m going for panda bear.


Just did it, and they say cheetah.

What books have influenced you the most?
Lawzy me, how much time do we have? So many. So, so many. But a top three:
·      Lloyd Alexander’s Prydain Cycle. The first books I really fell in love with.
·      Ray Bradbury’s Zen in the Art of Writing. It inspired me to write a story a week for half a year. I learned so much from doing that.


·      Most things by Joe R. Lansdale, but especially his Hap & Leonard series (recently made into some great TV over on the Sundance Channel). You see a lot of him in my adult fiction, and in the dialogue and friendships of my YA characters.

What are you future projects?
I’m working now on a sequel to Wrestling Demons. I won’t say much about it, but it puts Connor in the middle of a time travel emergency while he simultaneously tries to win a wrestling scholarship.
Also, I’m putting the finishing touches on Rio Sangre, a YA book about zombies and quantum physics.

If you couldn't be an author, what would your ideal career be?


I taught martial arts for many years, and would still be doing it happily if it wasn’t an evenings-and-weekends job. I couldn’t navigate that with being a good dad.

Have you gone on any literary pilgrimages?


Every time I’m in Boston, I drink an Amstel Light at the Four Seasons…the favorite beer and bar of Robert Parker’s Spenser.

What was the first book that made you cry?

Does writing energize you or exhaust you?

What is your writing Kryptonite?


Temptation to play with my sons or my gal.


No. What’s a reading slump?

How many unpublished/un-finished/work in progress books do you have?


Too many to count. I have all kinds of projects and project ideas. This may also be my writing kryptonite.
How many hours a day do you write?
4-6

Do you read your book's reviews? How do you deal with the bad or the good ones?


Yes. I personally thank a lot of people for five star and two star. I ignore one star reviews, since they almost always boil down to “I wish I had read a different book” – which isn’t useful. Two stars, though, can really point out your exact weaknesses. I end up reading those and thinking “Yeah. How did I miss that?” a lot of the time. 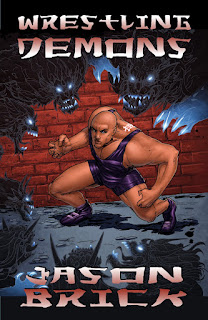 If you could recommend any three books that are similar to Emotions or that you would like your readers to read, what would they be?
Rick Riordan’s Percy Jackson series and its companions. Wrestling Demons does with Japanese legend and martial arts what he did with Greek (and then Egyptian and Norse) myth.
Anything and everything by Rich Wallace, especially One Good Punch. He does absolutely the best sports fiction for young adults being written today.


Hoot and Scat by Carl Hiassen. His characters and social conscience were part of  the inspiration for Connor’s personality.

Where did the idea for Wrestling Demons come from?
Like a lot of ideas, it just jumped on me while I was doing something else (in this case, driving home from a martial arts workshop in LA). But my background – wrestling, martial arts, and having lived for a while in Japan – definitely percolated there in the background until the idea was ready to leap forward.

How do you develop your plots and characters?


Connor Morgan is big – a heavyweight wrestler coming in around 260 as a high school sophomore. He grew up being beaten by his dad before his mom took them both away from that. What he wants more than anything in the world is to belong, and to protect the people he belongs with. As he discovers the mysteries of this story, he gets the chance to do both.

Is he successful? We’ll see….


Making time for it. I write nonfiction articles and ghostwrite books full-time. Making the space for my own projects is a constant challenge.

What was your favourite chapter or part to write and why?
My favorite chapter is probably the one in which Dr. Fayne wanders into the wizard Tarquin’s menagerie and he outlines for her where everything in his “cosmic zoo” came from, including he and his people. Then he shows her where they really are and why they’re in the position they’re in. It was a chance to do several things, to weave in sci-fi & real life cosmology with the fantasy setting, and to take readers in a direction I don’t think too many will see coming when the reveal is complete.

Is there a message in your books that you hope to readers will grasp?
I don’t really write “message” books. I usually try to explore a theme or two, but this one happens to just be a pretty straight-forward adventure story. That was kind of the message, I think. That there is still a place for old fashioned, pulp-style fiction without any deep meaning.

Will you be writing any more books in the world of the characters inside Eye of the Storm?
I do not have anything specific planned. However, the world of the book is broad enough to accommodate more stories, so it is something I might come back to eventually. I certainly would like to try.

What did you edit out of this book?
There was originally a much longer scene after Slade and Anna first arrive in the alternate reality, when they go to the island of the Founders. I wanted to really drive home that this isn’t just a lost world fantasy, that there was a highly advanced civilization present that somehow collapsed long ago. Ultimately the scene interrupted the pacing too much and all of that information comes out in the narrative later anyway, so I cut it.

What was the hardest scene for you to write?
Probably the climactic battle at the end, so in order to avoid spoilers I won’t say anything specific. What made it challenging was that I wanted to keep multiple threads all going at once, all moving toward a single conclusion. Balancing the right amount of attention with each thread was tough. Linger too much on one and the others suffer, don’t do enough with another and the whole effect is thrown off.
On the whole, most people so far seem to have enjoyed it, so hopefully I managed to hit the notes right on that.

I just want to say thank you to Jason for an incredible review! Your answers were to the point and interesting to read. I'm glad I got to do this interview with you!