The Other Einstein Review

I am so excited to share my thoughts on this book with you guys! This is probably the first historical fiction that I have actually completed in a very long time. But without further or do, heres my review: 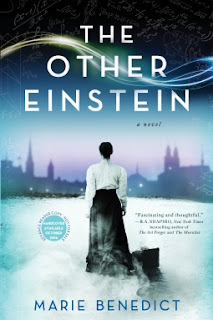 Goodreads Synopsis:
A vivid and mesmerizing novel about the extraordinary woman who married and worked with one of the greatest scientists in history.

What secrets may have lurked in the shadows of Albert Einstein's fame? His first wife, Mileva "Mitza" Marić, was more than the devoted mother of their three children- she was also a brilliant physicist in her own right, and her contributions to the special theory of relativity have been hotly debated for more than a century.

In 1896, the extraordinarily gifted Mileva is the only woman studying physics at an elite school in Zürich. There, she falls for the charismatic fellow student Albert Einstein, who promises to that her as an equal in both love and science. But as Albert's fame grows, so does Mileva's worry that her light will be lost in her husband's shadow forever.

A literary historical in the tradition of The Paris Wife and Mrs. Poe, The Other Einstein reveals a complicated partnership that is as fascinating as it is troubling.

Book Review:
Pre-reading thoughts:
I am a huge history fanatic especially since I started to take history at a high school level (I am hoping that at the end of next year I will be about to do my A-level in this course). I adore the cute prebook note that I got from the author in my edition. I don't know if other editions have them but his was really nice as Marie gave us insight in how she got the idea for her book. Which I find extremely interesting. I also enjoyed the insight it gave me in how much research went into the book. That jut made me appreciate the content of this book a lot more.

The 1800's was a very sexist time for woman. Whilst some women broke away from the norm to find careers, in both fields that can be described as a "men's" field and just something away from home and a nurturing job, they were often outcasted or frowned upon. And I feel like with the amount of progress we have made in this year a lone, writing a story like this can sometimes be difficult. As an author you want to create the correct atmosphere of the time but at the same time you want your main female character to rise above. I think that finding a balance between the two can be very difficult.

Writing Thoughts:
There is a clear characterization of the main character. From the beginning of the novel you can tell what kind of person Mileva will be. You can see that she is strong willed and incredible intelligent which shows through the writing. I think that Marie's way of writing was the perfect writing style for this story which relies so much on academics. There is a huge academic approach to the tone and register of the book. I think this really aids the story being told here, because Mileva is an extremely studious person and, my word, you can hear the intelligence that Mileva possessed in every word written. Despite the academic approach, the flow is incredible smooth. Marie's career as a lawyer does show through both the words and the structure of the book, however, it is refreshing rather than discouraging.

Plot:
This plot is so unique. I fell in love with the synopsis and with reading the first chapter, I was stuck in this world. I loved every minute of this story. There were these constant plot twists and turns that just sprang out of no where. Sometimes they were so obvious but other times they just popped out of no where. I loved that despite that this was fiction, there was a lot of hard evidence backing up a majority of what was being said. It was just amazing. You will never be bored with this book.

The characters definitely make the story, there is no doubt. If you took away the plot, there would still be these amazing characters just standing there. Some of the names were difficult to pronounce but I just let my mind do its own thing of making up how they possibly sound.. But I loved how distinctly different each and every character is. I was always able to tell the difference between each character. And I loved how even though the author brings in new side characters in one scene, she always brings the back in another scene which really added some dimension to your usually one dimension characters.

Final thoughts:
Oh my gosh was this book good. I couldn't put it down for too long. The story was absolutely addicting to read. It was like my own personal drug that I couldn't stop taking every second. I loved Mileva. Despite the challenges she face and will face, she remains strong and someone the young girls can look up to. I wouldn't trade my moment with this book for anything else in the world. Please pick it up, because you will not regret it.