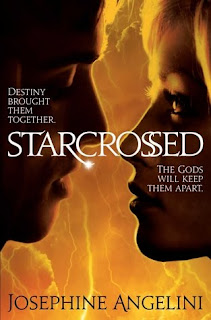 When shy, awkward Helen Hamilton meets Lucas Delos for the first time, she think two things: the first, that he is the most ridiculously beautiful boy she has ever seen in her life; the second, that she wants to kill him with her bare hands. An ancient cures means Lucas and Helen are destined to loathe one another. But sometimes love is stronger than hate, and not even the gods themselves can prevent what happens next…

P.S I wrote this review for school about a year ago and since then my reviewing style has changed.

Star-crossed lovers have been portrayed in every part of literature. Romeo and Juliet, Bonnie and Clyde, Othello and Desdemona and now we had Helen and Lucas. At first the two don’t appear to be star-crossed lovers but in fact were willing to kill each other, but something happens. Somehow the furies, that plagued them up until this point, are gone. Somehow the two of them stopped an ancient curse that has plagued their houses for as long as any of the houses can remember.
The book is about two young people who appear destined for each other but as the title suggests something tragic is about to happen. The book is based loosely on Greek mythology. We look at things like the Trojan War, which plays a massive role in plot of the story. This is a young adult fiction novel and is the first in the Starcrossed series which at this moment contains three books. The entire series is written in third perspective but viewed from Helen’s point of view. Helen and Lucas are the two main characters in the story but Helen is the lead protagonist. Josephine Angelini is a graduate of New York University’s Tisch School of the Arts of Theatre. This series was published by Harper Teen. The series is an international best seller.
All the characters in the book felt realistic and didn’t feel forced to develop and didn’t force a certain trait. Helen and Lucas main focus in the beginning is to make sure that the rest of Lucas’s house doesn’t know that she exists. Houses are similar to the ones we have during school. The two main houses of the story are the house of Thebes (Apollo) and Aphrodite. My overall favourite character is Lucas Delos. He has an interesting personality and is a false finder, someone who is able to tell if someone lies.
I believe that the book is well written, the author does not leave a stone unturned. There is no confusion in the story. I enjoyed the simple but fast-paced novel as although it appears long is a quick and easy read. In the last few chapters we are thrown into the deep end as new information is brought to light. I was entertained the entire way through, whether it was about the young couple’s relationship development or the action that occurred. I would highly recommend this book to people who enjoy YA fiction or just a refreshing story that is loosely based on Greek mythology.