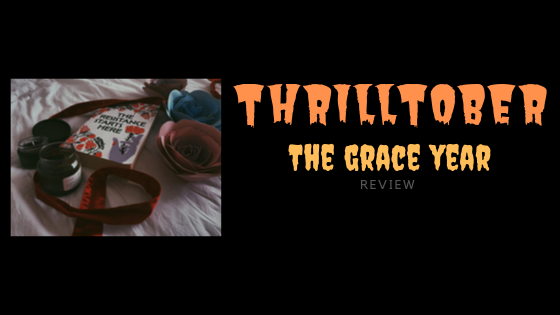 No one speaks of the grace year.
It's forbidden.
We're told we have the power to lure grown men from their beds, make boys lose their minds, and drive the wives mad with jealousy. That's why we're banished for our sixteenth year, to release our magic into the wild before we're allowed to return to civilization.
But I don't feel powerful.
I don't feel magical.

Tierney James lives in an isolated village where girls are banished at sixteen to the northern forest to brave the wilderness - and each other - for a year. They must rid themselves of their dangerous magic before returning purified and ready to marry - if they're lucky.

It is forbidden to speak of the grace year, but even so every girl knows that the coming year will change them - if they survive it...

The Grace Year is one of my most anticipated releases of the year and I am so happy that I was able to borrow an ARC from a friend. I have to be honest though, I am not 100% sure what the book is supposed to be about simply because I focused on the selling point of it being a feminist novel.

A huge shout out to Lorie for making this happen!

I felt as if the pacing of the writing was off. There was a lack of movement in the storyline at the beginning of the book, it felt as if I trudging through it all and almost DNF'ed the book around page 50 to 100. However, I did find the writing to be rich with details and the dialogue was well written.

I was not really impressed with the plot. I thought that what happened was okay but as mentioned in the pacing of the writing, I felt as if not a lot happened in this 400-page book. I definitely thought that the first 100 pages were boring and could not pull me in. It was definitely my need to like this book that kept me reading. I really enjoyed the direction that the book ended up taking because it was interesting and I wanted to know what would happen next. A lot of the action happened towards the end of the Grace Year and honestly, I was super annoyed by this.

I thought that the characters in this book lacked depth beyond their need to survive the world they founded themselves in. I thought that Tierney was all words and no action, at least until the end. She is not the girls she sells herself. I felt like what we saw of the Grace Year girls was merely the surface. They seemed to be nothing more than their role in the plot. I wanted more.

Overall, I feel as if this book was a little miss-sold and the ending too open-ended. I liked the richness of the writing but felt as if the pacing was off for the beginning of the book. The plot was super unimpressive. Not a lot happened and when things started to happen, it felt a little too late. I enjoyed what happened but found myself wanting a more conclusive ending. The characters were underdeveloped and felt like silhouettes of what the characters were supposed to be. However, despite the harsh criticism, I could not put the book down when it came to the last 100-150 pages of the book.