Hi everyone, I hope that you are doing well. Today I am participating in a blog tour organised by Smith Publicity for the book: Forgotten Men by Bill Thompson. 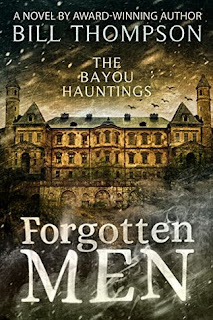 The once-famous Hotel Iberia was where society’s finest gathered in the days before 1859 when Victory, Louisiana became a ghost town. A building where people had laughed, dined and passed the time among friends became something dark, sinister and evil.
The town was dead, so no one complained when the Victory Institution for the Criminally Insane opened in the old hotel. The state sent its problems to the Asylum — violent, disturbed men who entered the gates of hell and never came back.
Hundreds died inside those walls before scandal closed the prison in 1907 and the corpses of those forgotten men were buried in a cemetery at the back of the property.
For a century, the building has been abandoned. But only by the living.
The dead couldn’t leave. Their tormented spirits couldn’t escape the horrors they had experienced. Unspeakable things kept them locked in the ancient cell blocks, doomed to haunt the building forever.
Rookie deputy sheriff Landry Drake spends a frightening afternoon inside the Asylum, investigates a series of apparently unrelated, unsolved murders inside the prison. He and a friend are caught in a trap. Kidnapped and chained in the old prison’s underground torture chamber, they know what fate awaits them at the hands of a maniacal sociopath. He’s killed many times before, and they will be next.
Landry must solve a puzzle before more people die, and he must find a way to keep himself from becoming the next name on the list of terrifying crimes at the Asylum.

I was sent the information for this book and I was like yea. I could use some of this in my life right now.

Thank you so much to Smith Publicity for providing me with a copy of this book. Just a small disclaimer for those reading this review. I have received this book for free. Please note that this does not affect my opinion in any way. All thoughts are my own.

I liked the writing. For the most part, it felt as though I was actually listening to a news show, which was nice. The problem that I had with the writing style was the multiple intersecting storylines. I felt as though the transitions were off and even a bit awkward. I also felt as though we needed a bit more detail in some areas.

I liked the plot but it was a bit slow paced for the most part. It wasn't a slow-burning plot that had me rushing to turn over the pages, instead, it lacked the constant intrigue. The plot might have been a little too predictable. I do think that the story was interesting though. I was curious to find out how right I was. I was also really happy to see how everything connected. This was done really well.

I didn't quite like the mish-mash of all these characters just being chucked into the storyline. In some cases, I thought they weren't really necessary. Other than that the characters were okay. I didn't quite connect with them but they still held some interest.

Overall, I thought the story was okay. It wasn't the best book that I've read but it was certainly not the worst book. The author has some things going for him. For example, the writing style wasn't bad. I felt as though it could use more detail in some areas. The plot was interesting but the pace was too slow. I felt like it needed a little more tension-filled moments. The characters felt very random but some of them added some value. I wasn't super in love with this book but it wasn't bad.  Thank you so much to Smith Publicity for providing me with a copy of this book.