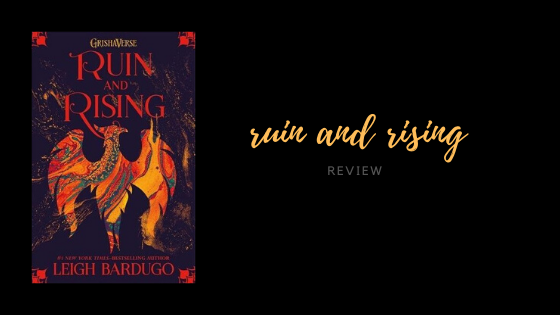 The capital has fallen.

The Darkling rules Ravka from his shadow throne.

Now the nation's fate rests with a broken Sun Summoner, a disgraced tracker, and the shattered remnants of a once-great magical army.

Deep in an ancient network of tunnels and caverns, a weakened Alina must submit to the dubious protection of the Apparat and the zealots who worship her as a Saint. Yet her plans lie elsewhere, with the hunt for the elusive firebird and the hope that an outlaw prince still survives.

Alina will have to forge new alliances and put aside old rivalries as she and Mal race to find the last of Morozova's amplifiers. But as she begins to unravel the Darkling's secrets, she reveals a past that will forever alter her understanding of the bond they share and the power she wields. The firebird is the one thing that stands between Ravka and destruction—and claiming it could cost Alina the very future she’s fighting for.

Wow. I don't know what to say. I really did not like the ending of this book. The writing was strong and followed the same trend as the previous two books. The plot was my biggest disappointment. This book was slow-paced and in the beginning it had some amazing turns that made sense and worked well with the characters and what the other two books were building up to. However, after the half-way mark, things went downhill very quickly. I found a lot of what happened to be unrealistic and it lacked believability. The ending made no sense to me whatsoever and went against everything that we have been told about Alina since book one. The ending was nowhere near satisfying and I finished this series feeling as if the readers were done dirty. I am incredibly sad and upset with this book, however, I do plan to continue reading books in this universe simply because the characters and the world building are absolutely amazing. Thank you to Pan Macmillan South Africa for providing me with a copy of this book.
Labels: 2 Stars Hachette Children's Group Leigh Bardugo Pan Macmillan Ruin and Rising Shadow and Bone Trilogy