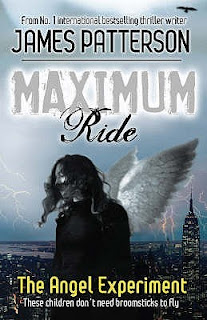 WELCOME TO MY NIGHTMARE Do not put this book down. I'm dead serious - your life could depend on it. I'm risking everything by telling you - but you need to know.

STRAP YOURSELF IN for the thrill ride you'll want to take again and again! From Death Valley, California, to the bowels of the New York City subway system, you're about to take off on a heart-stopping adventure that will blow you away...

YOUR FAITHFUL COMPANIONS: Max, Fang, Iggy, Nudge, the Gasman and Angel. Six kids who are pretty normal in most ways - except that they're 98% human, 2% bird. They grew up in a lab, living like rats in cages, but now they're free. Aside, of course, from the fact that they're prime prey for Erasers - wicked wolf-like creatures with a taste for flying humans.

THE MISSIONS: Rescue Angel from malicious mutants. Infiltrate a secret facility to track down the flock's missing parents. Scavenge for sustenance. Get revenge on an evil traitor. And save the world. If there's time.

I have to be honest, I never thought that I would read this series. It was something that was recommended to me years ago. Since then, I definitely think that I have outgrown the series. However, the only reason why I picked it up right now was that I watched the awful movie adaptation on Netflix and found that I actually liked the plot.

Wow, the style of writing present in this book is something that I haven't seen in a while. The style is in the first perspective but I don't think that it really added to the story well. The style felt like it was a great help in allowing the reader to read faster but it was telling more than showing. I also think that it highlights Patterson's inexperience when it comes to YA. The dialogue is awkward and there isn't a lot of detail.

The plot is slow. The pages flew by but the actual content is really slow. The book could have been condensed into maybe a 200- 300-page book. There was a lot of content that didn't actually add any value to the overarching plot of the book. I found that the key plot points were at the beginning of the book and right at the end of the book.

Overall, this book was meh until pretty much the end which ended up gripping me. The writing in this book wasn't amazing. I felt like it got the job done. There was a lot of telling going on. I didn't find the story to be believable. The plot was slow and felt like it just dragged on and on until the end where everything just picked up. I think that the basic concept of the book is good and that it has so much potential. The characters are interesting but they definitely need a little development. Overall, this story was okay. However, for what it was and for the time when it was published, I can definitely see why it did so well. If I was younger, I would have loved to read this book. I also think that if you are around 14 years old then you would also really enjoy this book.