Hi everyone. Today I am participating in the blog tour for Magic Heist by Mary Karlik. Thank you so much to Xpresso Tours for hosting the tour. 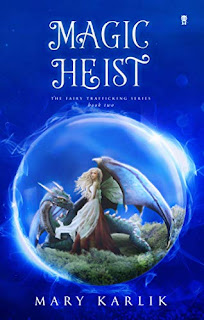 Layla rescued fairies that had been kidnapped and brought the human world. But now they can’t find their way back to the magic realm and time is running out.

Layla is a powerful fairy with magical ability that stretches beyond throwing spells. But with all that power, she still doesn’t know how to get over one-hundred fairies back to the magic realm. With their magic gone, the rescued fairies have no immunity to protect them from the toxins of the human world, and they’re slowly dying.

To find the path home, Layla knows she must team up with the one man who can make her insides quiver with an accidental brush of his fingertips. The same man who’s alter ego dragon is the natural predator of fairies. The man she knows will give his life to keep the fairies safe—Scotland’s finest Specialist Crime Division leader, Ian Cameron.

Ian has only been a dragon shifter for a few days. He struggles to control the dragon spirit locked inside his human form, doesn’t know what magical powers he may or may not have, and has never been to a magical world. But none of those things frighten him as much as the little spark that ignites in his soul when the half – human fairy is around.

But this little fairy is no Tinkerbell. She is brave, powerful, and can wield a sword like a medieval knight.

With growing feelings toward Layla, he couldn’t refuse to help her get the fairies back to the magic realm if he wanted to. The problem is the dragon who lives inside him would like nothing more than to feed his appetite with all of those little fairies—especially the half human one who killed its leader.

The Grass Market wasn’t far from Ian’s flat. But this version of the Grass Market was all wrong—as if she were looking at it through a mirror.
Layla stood in the walk and scanned the row of pubs. Everything was a mirror image. Even the lettering. But unlike the closed pubs on the other side of the mirror. These were brightly lit and teeming with customers.
A door flew open on the White Hart Inn. Laughter and voices shouting over one another spilled out. A kilt-clad elf stumbled from the inn and toward Layla. “Best deals in town. Third booth on the right. It’s not legal, but it’ll ease the boredom of being stuck in this place.” His speech was slurred, and his eyes ticked from side to side in rapid movements. He twirled unsteadily on one foot and staggered down the lane.
Layla studied the white stag above the door of the White Hart Inn. Had the coin taken her to the Magic Market? She had to know. And if things got sticky all she had to do was drop the coin in her other pocket and she’d return to—well, wherever the troll had intended.
She stepped up to the wooden door of the White Hart, shifted the coin from her right pocket to her left hand—just in case she needed a quick exit—sucked in a breath, ruffled her wings, and entered the pub.
It was packed. Humans, elves, ogres, and pixies were jammed around the bar waiting for their turn to order.
The bartender looked like a mix of human and ogre. He was taller than Buzzard and had a huge, protruding belly. His lower jaw hung open like an ogre’s, but he spoke with a human accent.
She was fascinated that there were so many magical creatures in one place—especially in the human world. Part of her wanted to mix with the elves, to pretend that she was in her own magical world. But what drew her like a moth to a flame, what she really wanted to investigate, was the yellow glow coming from the back of the pub.
As she moved closer to the glow, she saw that it wasn’t a thing or a being. It came from a corridor—like a back alley that seemed to link the row of pubs.
She stopped at the entrance and listened to music echoing off the walls of the buildings and caught glimpses of buskers performing in the distance. It was fantastic. It was wonderful. She couldn’t wait to bring Ian and Finn here.
The bartender shouted from behind the beer pull. “You can’t go in if you don't pay.”
The crowd in the pub went silent, and she felt all eyes on her.
She squeezed the coin. “I’ll just want a wee look.”
“You can’t go in if you don’t pay,” he repeated.
“I’m sorry. I don’t have money.” Her wings fluttered nervously.
“And don’t try magic. The last person who tried made a mess of things.”
“Thanks for the warning.” She craned her neck enough to see a world of booths beyond the confines of the pub. The light was so bright it made everything look as if it were bathed in gold.
She edged closer. Wooden stalls selling a variety of wares lined both sides of the lane. And she hadn’t seen this many magical creatures in one place since she was thirteen, and her Aunt Mauve had taken her to the fairy court.
But this place, this golden passage, was like a compressed version of what she’d seen as a child. This place was packed with gnomes, ogres, trolls, elves—even a unicorn.
Excitement made her wings flutter all the way to the tips. They had saved hundreds of fairies from Fauth. But what about the ones who’d already been sold? Could this be the trail to those fairies? Could this lead to the wand?
A pack of ogres shambled their way up the golden corridor. If she was to sneak across the line and fall in with them, maybe she could enter without a fee. She took a deep breath and eased toward to entrance. 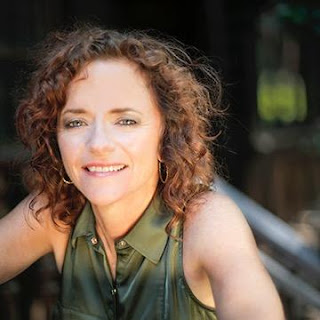 Mary Karlik has always been a dreamer. When she was a teen, she read The Lion, The Witch and the Wardrobe, and then sat in every wardrobe in her Nanna's home, trying to open the door to Narnia. She didn't find it, but she did discover her voice as an author: one filled with her young adult self, and grounded in her roots as a Texan and her Scottish heritage, nourished by obscure Scottish folklore.

You can find her Texas roots in her YA contemporary romance Hickville series , which has been described as "100% solid storytelling," and begins with Welcome to Hickville High, a "lovely story about growing up."

She digs deep into her Scottish roots - there is magic there, she just knows it - for the forthcoming YA epic fantasy Fairy Trafficking series, beginning with Magic Harvest.

She makes her home in the beautiful Sangre de Cristo mountains of Northern New Mexico where she is a certified professional ski instructor, but she also loves visiting Scotland where she is currently studying Scottish Gaelic at the University of Highlands and Islands in Skye. Mary also earned her MFA in Writing Popular Fiction from Seton Hill University, has a B.S. degree from Texas A&M University, and is a Registered Nurse.
.
Mary currently serves as the President of the Young Adult Chapter of Romance Writers of America and looks forward to raising a glass or two of gin and tonic with her fellow writers every year at RWA's national convention.