Lokal is Lekker - An Interview with Dominque Valente 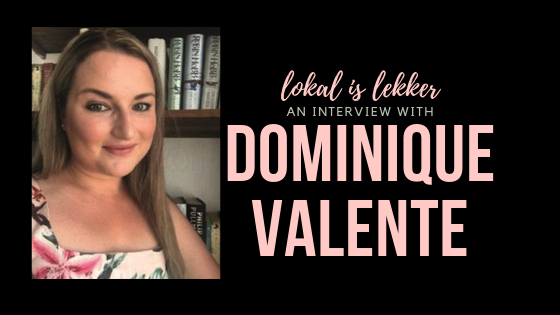 I am so happy to share my interview with Dominique Valente with you today. And if you would like to purchase a copy of Starfell: Willow Moss and the Lost Day you can buy one here. You can also find the book on Goodreads.

What inspired you to start writing?
Reading. Ever since I realised at age nine that books were written by real people I made a pact with myself that I’d write a novel someday.

Why middle grade?
It’s the genre that appeals to me most. It’s so inventive and original, full of pure storytelling magic. I write commercial women’s fiction under a pen name, Lily Graham, and while I love writing for grown-ups, too, I find that in middle-grade you get to break all the rules, and just tell the sort of story that’s in your (in my case, somewhat weird) heart. I’m always astonished at the array of incredible stories that I find on middle-grade shelves.

What was the path that led you to publication?
After university, I became a journalist – there’s nothing quite like a busy newsroom and editors with zero tolerance policies for sentimentality for learning how to write. From this I developed a really thick skin, or at least, a thicker one. Considering mine was tissue paper, this was a good thing. My grammar improved too, which was an even better thing. Still, that little nine-year-old voice that believed I would write a book someday persisted, and I started writing the world of Starfell, as an escape from the newsroom. I have a well-defined funny bone and quirky side, that alas, always gets in the way when I wish to write something ‘literary’…

The character of Willow Moss appeared, around eight years ago though. It took around four major redrafts and over twenty agent rejections. In that time I sort of semi put the story to the side, and wrote my first women’s fiction novel which I self-published – this eventually led to a three book deal with a traditional publisher as part of their digital imprint, and after writing four pen name books I dusted off Starfell once again, as I still couldn’t let it go, redrafted it and this time I got two agents who wanted to represent it – and ultimately when it went on submission to publishers –  I had over seven offers and it went to auction. Which I say not to brag – but to show that it truly, truly is about believing in yourself and the story and not giving.

At what point in your life did you just know that you wanted to become a writer?
At age nine I made a vow that one day I’d be an author, when I discovered that books were written by actual people and not delivered by magic. Books have always been the great love of my life and I thought that there could be no better way to spend your time. It would take at least another twenty plus years before I was able to make this come true though!

What books have influenced you the most?
So many, but I’d have to say my biggest author influences in children’s fiction are Terry Pratchett, Neil Gaiman, J.K. Rowling and probably Roald Dahl.

If you couldn't be an author, what would your ideal career be?
A wedding and event florist probably or bookseller or book blogger.

What is your preferred method of getting in touch with your readers
I love meeting them face-to-face, but online is fun too!

Do you believe that writers are born or taught?
A bit of both. I genuinely do think there is something weird that goes on inside that makes someone want to be a writer – it’s the reason they’ll keep going even after countless rejections and hurdles. It isn’t an easy job, it’s a bit like being a marathoner – so I think you have to have this inner drive to do it – though by ‘born’ I’d say that you would need to have this ignited in you somehow, not necessarily through birth, usually it’s through an early love of reading. However, having said that, I don’t think you need to be good at it at the outset – I wasn’t that kid who got all the praise for my creative writing. But I was the kid that wanted to improve the most. I think the wanting it part is the important part – as I just kept trying and trying until I was better and eventually that praise came, but that took time. So, maybe my answer is a person becomes a writer when they truly want it more than anything else. Same is true for artists, bakers, violinists, singers, etc.

What was the first book that made you cry?
The Diary of Anne Frank.

Have you ever been in a reading slump? If yes was there a specific book that put you in the slump?
I have but it’s usually more that I’m in a slump – I think reading is so subjective and your enjoyment is often down to how you’re feeling etc. I also tend to put books down rather fast if I’m not enjoying it. If I do feel like if this keeps happening and I feel like I’m in a slump, often it’s because I’m feeling stressed or a bit burnt out from my workload, then I’ll re-read some of my favourite books – like Robin Hobb’s Rain Wild series or Harry Potter to sort of cleanse my palate and mood.

How many unpublished/unfinished/ work-in-process books do you have?
At the moment, I have two books in progress – one will be published through my pen name, the other is the sequel to Starfell. I also have about two stories I tinker with that I’d eventually like to publish under my own name, both are middle-grade stories too.

How much time do you spend writing and reading each week?
It all depends on where I am in a particular book. I’m a full-time author with two books due every year, thanks to my pen name. I tend to write or edit depending on the stage of the project for most of the day, and reward myself with reading – usually though the reading is every night before bed. But if the book is good I have been known to keep going well into the wee hours which does make work a challenge the next day!

Do you read your book's reviews? How do you deal with the bad or the good ones?
I read the early reviews that start trickling in when my book is in the advanced reader / proof stage, just before publication. I find that I can then get a feel for how it will be received. I don’t avoid my reviews, so if I get tagged in one I’ll read it but I do try not to go out looking for them as this can be unhealthy. I think early on in my career I read too many and took things a bit personally, I’ve got better at this.

If you could recommend any three books that are similar to Starfell or that you would like your readers to read, what would they be?
Cressida Cowell’s Wizard of Once series, The Nevermoor series by Jessica Townsend and Terry Pratchett’s Wee Free Men series.

Where did the idea for Starfell come from?
Around eight years ago while I was driving home from work, the character of Willow Moss popped into my head while I was thinking about the idea that so many fantasy stories feature ‘the chosen one’’ … the lost princess who must save the kingdom, the only one with magic in a thousand years... who must save the world, and in some ways, it annoyed me, because even in my own mind I couldn’t relate. It’s like the equivalent of being a supermodel … or the idea of ‘who you were in a past life’, when asked, everyone is always a king or a queen in their own minds, but chances are, most likely, not. There’s a high probability that you were some kind of serving maid … someone had to have the job… and while I was thinking this, the character of young witch, with the worst magical ability in her family… appeared.

In ten words or less, describe your book.
A magical romp filled with witches, monsters, trolls and dragons.

What is the most exciting thing about Starfell being published?
Meeting children excited to read it, and seeing it in bookshops!

What was the hardest part of writing this book?
Figuring out the plot and trying not to overcomplicate it – it has taken years for it to seem as simple as it is.

What was your favourite chapter or part to write and why?
Chapter three – that’s when we meet Oswin, the monster from under-the-bed, Willow’s best-friend, and grumpy Kobold side-kick. Also, chapter eight, when we meet Feathering, the Cloud Dragon.

Is there a message in your book that you hope readers will grasp?
There is magic in being yourself, and everyone is special in their own way. Also, it doesn’t take the most powerful people to change the world, you just have to be willing to try.

What did you edit out this book?
There were loads, but many have crept back into the second book – like the magical town of Library where everyone there is a librarian and Starfell’s magical secrets are kept by people known as Secret Keepers.

What was the hardest scene for you to write
Something really sad that happens near the end – I blubbed.
Labels: Author Q&A Author Spotlight debut author Dominique Valente Interview Lokal is Lekker South African Authors