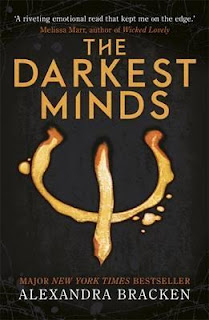 When Ruby woke up on her tenth birthday, something about her had changed. Something frightening enough to make her parents lock her in the garage and call the police. Something that got her sent to Thurmond, a brutal government “rehabilitation camp.” She might have survived the mysterious disease that had killed most of America’s children, but she and the others emerged with something far worse: frightening abilities they could not control.
Now sixteen, Ruby is one of the dangerous ones. When the truth comes out, Ruby barely escapes Thurmond with her life. She is on the run, desperate to find the only safe haven left for kids like her—East River. She joins a group of kids who have escaped their own camp. Liam, their brave leader, is falling hard for Ruby. But no matter how much she aches for him, Ruby can’t risk getting close. Not after what happened to her parents. When they arrive at East River, nothing is as it seems, least of all its mysterious leader. But there are other forces at work, people who will stop at nothing to use Ruby in their fight against the government. Ruby will be faced with a terrible choice, one that may mean giving up her only chance at having a life worth living.

With all the hype surrounding the movie release, I figured that I would finally jump into this series after hearing so much about it. I am not really the biggest fan of dystopian these days because a lot of them sound the same but I am intrigued by this one.

The writing was okay. I felt like there wasn't a lot of detail. Ruby was just someone who was beautiful but beyond that, I don't know what she is described as. Liam and the others have a little more detail attached to them so it makes up for that fact. I really enjoyed the pacing because it really helped me to get through this tome. The dialogue was also really nice in some places, it seemed to flow really naturally.

The premise of this book is great. It is definitely something that helps to bring in readers. However, I felt as if the book was a bit too long. The scenes which contributed a lot to the plot were small and few in-between the filler parts which seemed to dominate this book in the beginning. I enjoyed the world building but after a while, it got too much and I kind of wanted the plot to progress a little faster. I liked how we have these kids that do different things but for the life of me, I have no idea what a Green can do.

Ruby sees herself as something dangerous and controllable and this element adds a lot of tension to the book because will she accept herself and will others also accept her or will she be left on her own. I liked the relationship between Liam and Ruby. They were almost each other's anchors and it added a really great element to the story. I will say that the characters in this book were extremely developed and their personalities where intricate.

Overall, I enjoyed this book. It was both what I expected and not what I expected. The writing had a good pace but the details were lacking in some places. The plot was interesting and pulled me in but I felt as if it took too long for certain events to happen. The characters were well developed and really stood out. Ruby's dilemma added an extra layer to the story. I look forward to seeing how the movie translates the words on the page to a motion picture. I also look forward to continuing Ruby's story.