Hi guys! As you can see, today I am participating in a blog tour hosted by Xpresso Book Tours for the  book Infamous. 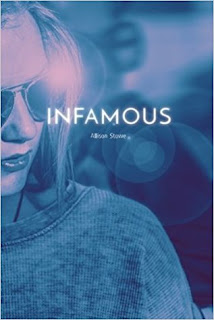 
Experience a dual perspective YA novel, following the aftermath of a high profile kidnapping case. It’s been five years since the event, and ‘Cassie Waterson’ has become a household name. She didn’t do anything important. In fact, she literally did nothing. She just stood there, watching as a stranger stuffed her baby sister into a station wagon. She should have been punished for not acting. Instead, she was splashed across TV screens as the sole witness to Sophie’s abduction. While everyone knows Cassie, no one really does. They know the girl from the talk show interviews – strong, confident, and certain that her sister will come home. The real Cassie is none of those things, and the one person who knows it is the one person she should avoid.
Meanwhile, ‘Alexis Aldridge’ is a name you probably haven’t heard before. Her parents raised her entirely indoors, blaming the infinite number of rebels lurking the streets for her imprisonment. Though Alexis and Cassie lead opposite lives, they’re both desperate for one thing – normalcy.

The two began to walk in sync, up the hill in front of them and towards a pedestrian path nearby. The path was swarming with people. Cassie was momentarily surprised at the crowds; she didn’t remember the park ever being this busy. Then she realized: they were all here because of her. Her interviews and statements drew them here to say goodbye to Sophie.
Although Cassie appreciated their support, she wasn’t in the mood for highly populated areas at the moment. She tugged at Sara’s arm, disrupting the course of their trail.
“Let’s go this way,” Cassie commanded.
“Alright. Ooh! If you want to take your mind off things, I saw a really cool looking playground back there.”
Though they were now walking parallel to the people, with trees in between, Cassie couldn’t keep her eyes off them. Most of them wore black and about half showed signs of sadness… walking in groups but rarely speaking to one another, and staring at the pavement rather than the gardens. But even some of the black-clad visitors were laughing with partners or friends, seemingly carefree. It didn’t feel right.
“I haven’t played on swings in such a long time! It’s been like, a whole month. That’s just the best rush, isn’t it Cass? I love to feel like I’m flying. Don’t you?”
One young woman, probably in her early twenties, turned away from her friends with a toothy grin. Her eyes locked to Cassie magnetically. Oh no. The discovery left her feeling exposed. Irrationally, she’d felt as though the trees acted as a one-way mirror; she could see them but they couldn’t see her. Despite all the negative feelings pulsating through her, Cassie smiled. It was an instinct that she couldn’t control, and the woman seemed to take it as an invitation.
From her pea coat, she extracted a digital camera. She paused in her tracks to position the shot. Cassie was too far away to hear the click, but she saw the flash and from the pedestrians’ reactions, she knew she wasn’t the only one. The act created a copycat phenomenon, and a wave of cameras appeared, all pointing towards her and going off sporadically.
“That’s not to say that I exclusively like swings,” Sara continued, oblivious to the photo opp that was taking place a few meters away. “I’ve always been a jungle gym kind of girl, too…”
“Sara?” Cassie interrupted.
“I know! Surprising isn’t it? Can’t dodge a ball for the life of me, but my balance is pretty good!”
“Sara, let’s go,” Cassie ordered. Though her voice was steady, she could hear the desperation seeping through. She had ten minutes left to be alone, and live in the world where her sister was still out there, waiting to come home. There wasn’t time for this. 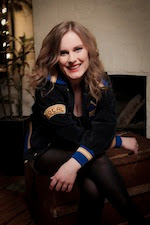 Allison Stowe is the author of the YA novel, ‘Infamous.’ Raised in a generic Toronto suburb, Allison spent her childhood posting fan fiction online in hopes of influencing The WB’s writing rooms. She wrote her first novel at age 13. It was based on her favorite TV show, and upon submission she learned of copyright law.

In 2010, she graduated with a BA (Hons) in Journalism from Ryerson University, where she was the Managing Editor of the online newspaper. During her brief journalistic career, Allison wrote for Chatelaine magazine and TV Guide Canada (essentially achieving a life dream). Shortly after graduation, she relocated to Brighton, UK, and refocused her attention on her second passion – helping young people.


While studying for her MSc in Educational Psychology at UCL, Allison wrote Infamous as a way to fulfil her instinct to keep writing. When she isn’t writing about the lives of young adults, or watching prime time teen dramas, Allison mentors university students who’ve been diagnosed with mental health issues. She lives in London, UK, with her fluffy ginger cat, Sawyer. ‘Infamous’ is her debut novel.