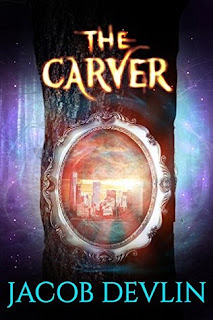 THE GIRL IN THE RED HOOD has been looking for her mother for six months, searching the depths of New York's subways to the heights of its skyscrapers...

THE PRINCE looks like he's from another time entirely, or maybe he's just too good at his job at Ye Old Renaissance Faire...

THE ACTRESS is lighting up Hollywood Boulevard with her spellbinding and strikingly convincing portrayal of a famous fairy. Her name may be big, but her secrets barely fit in one world...

Fifteen-year-old Crescenzo never would have believed his father's carvings were anything more than "stupid toys." All he knows is a boring life in an ordinary Virginia suburb, from which his mother and his best friend have been missing for years. When his father disappears next, all Crescenzo has left is his goofy neighbor, Pietro, who believes he's really Peter Pan and that Crescenzo is the son of Pinocchio. What's more: Pietro insists that they can find their loved ones by looking to the strange collection of wooden figurines Crescenzo's father left behind.

With Pietro's help, Crescenzo sets off on an adventure to unite the real life counterparts to his figurines. It's enough of a shock that they're actually real, but the night he meets the Girl in the Red Hood, dark truths burst from the past. Suddenly, Crescenzo is tangled in a nightmare where magic mirrors and evil queens rule, and where everyone he loves is running out of time.

I picked up this book because Blaze Publishing has organized a readalong with for all of their reps. I jumped straight onto this bandwagon when I heard that they were doing this because it was about time that I started to read and review these books. It was a perfect opportunity that I couldn't pass up. Thank you to Blaze Publishing for providing me a copy of this book. Please note that in no way does receiving this book affect my opinions. All thoughts are my own.

The writing was interesting to read. It was detailed enough to get the sense of the area and the landscape but not so much so that it distracts from the story that is unfolding. It took awhile to get used to but I quite enjoyed it. There was also a really good pacing throughout the book. The switch between time periods and point of views created this constant build of tension which helped you to move through the book. However, if you don't like multiple point of views and jumpy books then I don't think that this would be the book for you.

I loved how the author incorporated all of our favorite fairy tales by creating a multiverse. It was super intriguing and I think that it aided the story well. Despite that there was a lot going on, it was more of an organized "chaos" that actual chaos. Everything flowed together well. The author also answered questions and provided information when we need it. It was a well thought of story that was structured and interesting. This was definitely an original idea.

There were a lot of characters in this story and the only one that I didn't like as much as the others was the son. Crescenzo was just one character that didn't sit that well. But I liked everyone else, they were well written and interesting. I enjoyed Hansel's character the most because I enjoyed the internal conflict. I also really enjoyed Pietro's character, he was a true child at heart and if I am honest was just a delight to read about!

Overall, I really enjoyed this story. I thought it was well written and well planned. Everything worked with the story and the story itself was original and unique. Readers of fairytales will love The Carver with a mix and match of your favourite fairytale characters, what could go wrong? Thank you to Blaze Publishing for providing me a copy of this book.