Lokal is Lekker - An Interview with Hayley Chewins 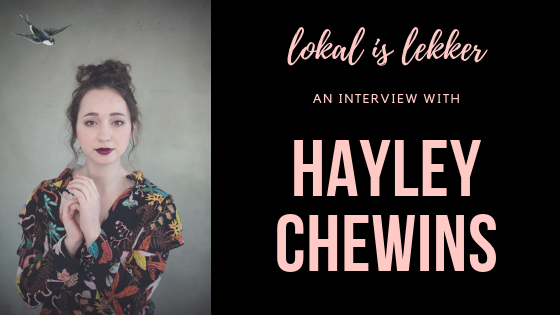 I am so happy to share my interview with Hayley Chewins with you today. A little bit about Hayley; she writes books about magical girls with secrets and The Turnaway Girls is her debut. Hayley grew up in Cape Town, South Africa and she currently resides in Johannesburg. If you would like to know more about her, you can find her website here. And if you would like to purchase a copy of The Turnaway Girls you can buy one here. You can also find the book on Goodreads.

What inspired you to start writing?
I have always loved words. I learnt to read early and carried a notebook around with me from a young age. I wrote lots of songs, poems and beginnings of stories. I wanted to write novels and screenplays from about the age of nine, but the thought of writing something so long terrified me. It wasn’t until I was 23 that I wrote a draft of a novel all the way to the end.

Why middle grade?
I remember so vividly what it was like to be 10, and 11, and 12. It’s this really interesting time because you’re not a small child anymore, but you’re also not a teenager yet. It’s a kind of threshold period and it’s fascinating and infuriating and heartbreaking all at once.

What was the path that led you to publication?
Like I said, I always wanted to be a writer. I wanted to write everything—songs, books, poems, screenplays. I studied music at university for a year but dropped out because I had extreme performance anxiety. I ended up doing a BA LLB. It was while I was studying law—and didn’t have time for reading or writing fiction and poetry—that I finally admitted to myself that I wanted to write a novel, because I felt the absence of fiction in my life like a physical wound. I bought a book called WRITE-A-THON: WRITE YOUR BOOK IN 26 DAYS (AND LIVE TO TELL ABOUT IT). It seemed like an improbable feat to me, but I thought I would at least try. Well, I did write a book in 26 days. It was a terrible book, and rather short, but it was a book. I had proven to myself that I could do it. But I wanted to write something better, so I kept doing it. I kept starting things and I kept finishing things. I queried one middle grade project before THE TURNAWAY GIRLS, which got me an offer to revise and resubmit that ultimately ended in a rejection but taught me a lot about writing and revising. I started writing THE TURNAWAY GIRLS on 1 January 2015. By April, I had entered a pitch contest and was querying. Patricia Nelson at Marsal Lyon Literary Agency loved the voice and concept of THE TURNAWAY GIRLS but asked me if I could do some revisions and resubmit. I did the revisions, and signed with her in July 2015. I worked on the new version of THE TURNAWAY GIRLS until February 2016, when we went on submission. A handful of rejections and another revise and resubmit later, I had a book deal with Candlewick Press.

At what point in your life did you just know that you wanted to become a writer?
I always wanted to be a writer! I don’t remember the exact moment I realised it. Writing and reading were always, always a part of my life. But it was while I was studying law that I realised how important stories were to me, and that I couldn’t put off writing a book any longer.

What books have influenced you the most?
Laini Taylor’s books, and Franny Billingsley’s books. And, for craft: SAVE THE CAT by Blake Snyder. I have also been inspired and challenged by: Claire Legrand, Lindsay Eagar, Anne Ursu, K.A. Reynolds, Jandy Nelson, Sarah Crossan, Catherynne M. Valente, David Almond, and countless others.

If you couldn’t be an author, what would your ideal career be?
A singer-songwriter.

Do you believe that writers are born or taught?
Both. Most writers are born with a natural love of language and narrative, but it takes a lot of work to write a book that’s good enough to be published. You can take classes, or you can read a lot about writing and learn yourself, but the most important thing is to write. To practice. Reading and taking classes helps, but you can only really learn to do it by doing it.

What was the first book that made you cry?
I don’t remember! But the last book to make me cry was A GENTLEMAN IN MOSCOW by Amor Towles.

Have you ever been in a reading slump?If yes, was there a specific book that put you in the slump?
Yes, many times! My reading slump after STRANGE THE DREAMER by Laini Taylor lasted a long time because there’s nothing quite like a Laini Taylor book.

How many unpublished/unfinished/work-in-progress books do you have?
I wrote quite a few things before I started querying, and sometimes wrote the same concept two or three times, trying to get it right. So I lost count. But I think probably about ten or twelve. And I’m currently working on four projects that have yet to be finished or sold.

How much time do you spend writing and reading each week?
At least eight hours a day, five days a week (reading and writing combined). I try to take weekends off but I usually end up reading books that excite me.

Do you read your reviews? How do you deal with the bad or the good ones?
I do read them. I’m too curious not to! In the beginning, it was difficult when a bad review came in, but it stings a lot less now. Not every book is for everyone. And that’s absolutely okay.

If you could recommend any three books that are similar to The Turnaway Girls or that you would like your readers to read, what would they be?
THE FOLK KEEPER by Franny Billingsley, THE GIRL OF INK AND STARS by Kiran Millwood Hargrave, and THE GIRL WHO DRANK THE MOON by Kelly Barnhill.

In ten words or less, describe your book
A dark fairy tale full of music, birds and secrets.

What is the most exciting thing about The Turnaway Girlsbeing published?
Everything! Every step of the process has been so wonderful. I’m really lucky to have landed with such an incredible team. I have especially enjoyed hearing from young readers who have liked the book, though. It’s so surreal.

What was the hardest part of writing this book?
Getting the plot nailed down! I wrote so many drafts that I lost count.

What was your favorite chapter or part to write and why?
I really love Chapter Three, when Delphernia sings in the hollow tree and discovers a sliver of her true magic. It’s such a poignant moment and it’s loaded with tension because she’s going against everything she’s been taught.

Is there a message in your books that you hope readers will grasp?
I didn’t write THE TURNAWAY GIRLS with a specific message in mind. But I’d love it if the book helped young girls to recognise and use their true voices for good.

What did you edit out of this book?
A number of things, including a talking orangutan!

What was the hardest scene for you to write?
The library scene. It involved a lot of subtle choreography and dialogue that meant one thing and sounded like another—tricky stuff!