Hi everyone! Today I am participating in the blog tour for Altered by Vicki Stiefel. Thank you to Xpresso Tours for organising the tour. 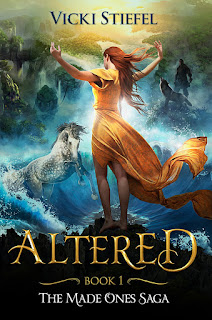 The Eleutians are dying out, one female at a time. To save their species, the powerful Alchemic Clan conscripts women from parallel worlds, altering them into the perfect breeding stock.

Kitlyn, a retired circus equestrian broken in both body and spirit, awakens on a strange world in her own much-younger body. She has been transformed into a Made One, but the gift of youth and the promise of a new life come at a terrible price.

Rafe, the Wolf Clan's warrior champion, vows to find the cause of the species' decline. He's certain the Alchemics' bid to save the Eleutians is but a thin veneer masking a dark purpose.

That vow becomes hard to keep with the threat of an inter-clan conflict and the arrival of the proud Made One named Kitlyn.

To save herself and those like her, Kit must carve a dangerous path in this new reality and make a choice that may cost her her freedom, her life, and the life of the Eleutian warrior she's come to love.

With the bathroom lock’s satisfying snick, Kit leaned her forehead against the warm wood and took a couple of deep breaths. It felt good to be alone.
She shrugged off the sheepskin coat, then ripped the damned dress over her head. Naked, eyes squished tight, she ran her hands across unnaturally firm flesh—unnatural for a fifty-eight-year-old woman, at least.
No middle-aged pooch. No cellulite dimples. No swollen left knee. She opened her eyes, the ceiling’s glow filling the small room with ambient light. But she wasn’t ready to look in the mirror.
The arm she held in front of her was long and lean, the skin pale and dotted with a few freckles. Her fingers traced her bicep and forearm muscles, slightly defined and strong. Her arm hadn’t looked like that since her vaulting days with her beloved circus horses. Voltige demanded strength, discipline, and endurance to execute the tricks while riding the ring before an audience of thousands.
Her hand glided over her muscled thigh, her firm abdomen, and her round, upthrust breasts—the way they’d been in her twenties.
She had missed this body.
With deliberate steps, she moved in front of the silvered mirror that hung above the sink. Gathering her courage, as she’d done before that first leap onto the horse’s back, she stilled. Paused. Breathed. Then she raised her face to the mirror.
She gasped. The woman staring back at her was in her prime. Maybe twenty-eight or thirty. She gripped the sink, afraid she’d topple over from shaking so badly.
Kit pressed her palm to the mirror.
All right.
She pinched the tip of her nipple hard, twisted.
“Damn!” Pain. Real pain.
“Are you all right in there?” came her rescuer’s voice.
“I’m fine,” she said back, though her voice wavered.
Hands pressing on the mirror, she leaned in close. The nose that once had a bump from a childhood soccer injury was now aquiline. No spiderwebs of red threaded her eyes, nor did the clouding of cataracts gray them, her irises darkened to their original green. Her forehead was clear of lines, and lips once distorted by the pull of age now bloomed with youthful fullness.
The scars mottling the left side of her face, the ridges and rills, the flesh hard and shiny since that disastrous day at the circus—gone, her face unblemished.
Her fingers trailed down her cheek seeking the familiar texture of her disfigurement only to brush across the cream of flawless skin.
The face of her youth stared back at her. She wasn’t just whole again. She was young again.
Tears spilled over her lids and tracked down her rosy cheeks to hang suspended on her undamaged chin.
Kit whirled, putting her back to the mirror and crossing her arms around her waist.
Astonishing. Incredible.
But what about her Huntington’s? 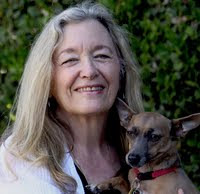 Vicki's fantasy romantic suspense series, The Afterworld Chronicles, launched with Chest of Bone, followed by Chest of Stone and Chest of Time. She is currently pounding the keys on her series' fourth novel, Chest of Fire, and the first in a new series, The Made Ones Sags: Altered.

Her mystery/thrillers include Body Parts, The Dead Stone, The Bone Man, and The Grief Shop, a Daphne du Maurier prize winner. All feature homicide counselor Tally Whyte. All are available as ebooks.

She co-wrote (with Lisa Souza) and photographed the 10 Secrets of the LaidBack Knitters. With her late husband, William G. Tapply, she ran The Writers Studio workshops in creative fiction.

She loves both a well-crafted sentence and unlocking the doors of a student's imagination.

She grew up in professional theater and planned to become an actress, with a bent for song and dance. She didn't. Instead, she's been a professional photographer, a high-school teacher, a hamburger slinger, a scuba-shop manager, and an editor.

She's Blake's and Ben's mom, her favorite role of all.

Her passions include scuba diving and fly fishing and knitting; photography and movies; vinho verde and bourbon (not together!); Maine lobster and chocolate (also not together!); and musical comedy scores, which she sing in the shower, unfortunately not an Equity venue; and a fascination with people in all walks of life. .