I currently have a review up for Emotions if you are interested. You can find that review here.

This month, I will be featuring Arnulfo Cantarero ! I am extremely happy that he agreed to do the Author Spotlight!

Follow these links to find Arnulfo on several sites!

But now it is time for the Author Spotlight 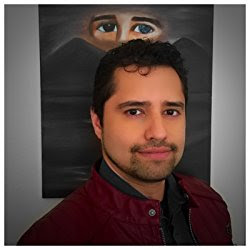 Like any good writer, I’ve always been an avid reader. One day, as I finished reading one of the very first YA books I had ever found, I thought to mysel. “I’d like to read something different, create a character that I could relate to.” And so my writing journey began.

IF you could give any advice to a non-published writer, other than to just push through it, what would it be?
You nailed it with just push through, however, I’d highly recommend to get yourself some good beta readers. You may love your story, and think it’s perfect, but they can point out what works and what doesn’t and spot errors not only in grammar but also in the flow of the story. They can also help with knowledge you may not have. One of my beta readers is French and she’s helped tremendously in making sure the female protagonist does her culture justice.

At what point in your life did you just know that you wanted to become a writer?
Definitely in college. As I started to write my first story, I realized I didn’t want to stop. I’d be up to two in the morning and the words wouldn’t stop coming. It was then that I realized I had found my calling.

If you have done the Pottermore Houses test, what is your house?
Slytherin, which shocked me. I always thought I’d be in Ravenclaw (under represented in the books if you ask me.)

If you have done that Pottermore Patronous Test, that is your patrons?
Not yet, but I’d hope it’d be Stitch (from Lilo and Stitch fame)

What books have influenced you the most?
Love Child by Andrew Neiderman for one and Interview with the vampire by Anne Rice. She has a way with words to say the least.

What are you future projects?
Currently working on the sequel for Emotions (still editing) and coming up with the ideas for the book after that one. I’m also working on some original projects within the Emotions universe but with brand new characters and completely different settings.

If you couldn't be an author, what would your ideal career be?
Inventor, I love coming up with gadgets (I used to do it a lot in high school)


I’d say email, since it allows me to craft an answer, however, Instagram allows me to reach a wider audience.

Have you gone on any literary pilgrimages?
Yes, when I was writing Emotions. I had reached sort of an impasse when it came to the story. I took off for Vail Colorado (off season, of course) and just sat in my hotel room for a couple of days. I went off to see the town and before I knew it, the words just started to flow once again. I must’ve written nearly sixty pages in two days after that.

What was the first book that made you cry?
hmm, can’t say that I have cried but Interview with the Vampire when Claudia died and how Louie reacted. Brad Pitt did a great job in the movie as well.

What is your writing Kryptonite?
: Believe it or not, temperature. If it’s too warm, I get so lazy. I might as well just head to a pool because I can’t concentrate. If it’s too cold, I can feel my fingers cramping up, and all I want to do is get underneath a blanket and watch some TV. In either case, no writing for me.


There was one, and I hate to say it, but it was Romeo and Juliet. I know it’s a great story but the old English frustrated me to the point that I didn’t want to continue reading it, or anything else for that matter for a while. I grabbed from the Earth to the moon (I had read it as a kid) and got out of it pretty quickly.

How many unpublished/un-finished/work in progress books do you have?
Currently, two. The sequel to Emotions and an original novel within the same universe. The sequel is taking precedent though (not enough hours in the day, you know). I also wanted to make Emotions into an Audio book but again, not enough hours to record it.

How many hours a day do you write?
At least two. I hope to write for at least eight hours one day soon.

Do you read your book's reviews? How do you deal with the bad or the good ones?
I do, every single one of them. When it’s a good review, I jump for joy (it’s like a shot of adrenaline) however, when it’s a not so good review, it’s as if someone told me I’d have ugly children one day. It’s a downer to say the least.

If you could recommend any three books that are similar to Emotions or that you would like your readers to read, what would they be?


That’s a tough one but I’d recommend The Heroes of Olympus by Rick Riordan, I am number four by Pittacus Lore, and 2001; a space odyssey by Arthur C. Clarke.

Where did the idea for Emotions come from?


I have always been a fan of Star Trek, specially Spock and Data. While the Vulcans are conditioned to not feel, I wondered how it would be if you truly couldn’t feel and not for a lack of trying. Then, I expanded on the concept, making it into a coming of age story and since he couldn’t be alone, I created the character of Computer. The story started of from there.

How do you develop your plots and characters?
You always write about what you know, so I took a little bit from my life. I based the main characters on my friends growing up and enhanced some of their attributes. The plots were a bit more complicated as they needed to contribute to the overall story. I used other elements from my life, and made them more extraordinary. I also watch TV while I write and sometimes that makes it into the book (hence the scene in India).


While I’d like to claim that I based Jason on myself, that would be a gross exaggeration. If anything, I made sure he personified a blank slate, since emotions shape us, and made him the best person that the emotional episodes he has could create. I knew he wouldn’t fit in, as he wouldn’t care about doing so, and that creates friction in the real world. With no emotions to react to bullying, for example, I knew I’d found my protagonist. Writing how he would react was fun to say the least.


The editing, definitely. Writing the story, coming up with the plots and adventures wasn’t too hard. However, when editing, that’s when it gets tough. Fixing the grammar, making sure the story flows properly, that there are no plot holes, that’s tough. Beta readers help but it’s a time consuming process to say the least.

What was your favourite chapter or part to write and why?


So many, however, I’d have to say there is a part, around the beginning of the book, where he discovers tequila. Needless to say, stuff happens.

Is there a message in your books that you hope to readers will grasp?


I guess there’s a double message. One, that emotions can empower us and we needn’t  be at their mercy. Second, (and I was made aware of this later) that bullying is a serious issue but if you stand up to them, they will crumble. Since Jason feels no fear, it’s easy for him to do so, but it’s something we all need to.

Will you be reading any more books in the world of Jason?


Oh yes, in fact I’m almost done with the sequel (editing right now, gulp) and I’m creating the world for the third part as well (still only in my head right now though)

What did you edit out of this book?


There was a lot of backstory about Jason’s world and how he met Computer. However, on closer inspection, I realized they slowed down the story, and I could always bring those elements back in later books. There were also some more mature elements that I took as well. Taking them out only improved the overall story.

What was the hardest scene for you to write?


The bullying scenes, for sure. It’s never easy to write something like that, specially to make it believable. I had to make sure they had a reason for being bullies and to show that they are only human, just like everybody else (except for Jason, of course).

I just want to say thank you to Arnulfo for an incredible review! It was great getting to know you a bit more as well as getting to know the effort that went into Emotions before it was published!