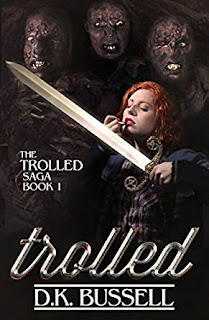 Seventeen-year-old student Nat Lawler doesn't know her orc from her elf bow. She's never swung a a sword before, never ridden a unicorn, or fought a troll outside of the internet. And yet here she is, trapped in a fantasy world and tasked with defeating its evil queen, Drensila the Black.

Thankfully, some of Nat's role-player friends were thrown into the mis too, and join her on her epic quest. They've spent their lives preparing for his moment, but now it's time for action, because this fantasy just got real.

I received this book in exchange for an honest review. In no way has receiving this book affected my opinion. All thoughts are my own. I decided to pick this book up because one; I need to review it and  two; I thought it would be short and quick read. I had also planned to post this review today and I wanted to stick to my plans as much as I possibly can.

The writing in this book was so descriptive. Every object had an adjective attached to it. I didn't mind this for the most part but there were times when it was too much or where the description was weird and didn't seem to fit well.

A quick warning, this book is told in two perspectives, also be aware that they are alternating and aren't separated by chapters but rather by scenes. One thing that I really didn't enjoy about this book was that there wasn't a lot of chapters. There were a couple but I felt like there should've been more to separate the scenes better.

This felt quite similar to a fan fiction. And whilst I didn't mind it, it become quite obvious that the author is a bug fan of Lord of the Rings.

The plot wasn't too bad. Everything happened at a reasonable pace and didn't feel rushed. There was a lot of action and dialogue to keep on entertained and occupied. At some points of the book I was anticipating something epic to happen.

I never grew attached to the characters in the story. However they each had their little quirks which worked well for them and the story. I think the side characters aided the story really well. The cast of characters presented are a diverse bunch and it was interesting to see how they each threw some British slang into their sentences.

Overall, the book was enjoyable. There was never a dull moment and whilst the story did present itself as humorous on some occasions, I didn't always get the humor.  But other than that, it was a delightful quick read.