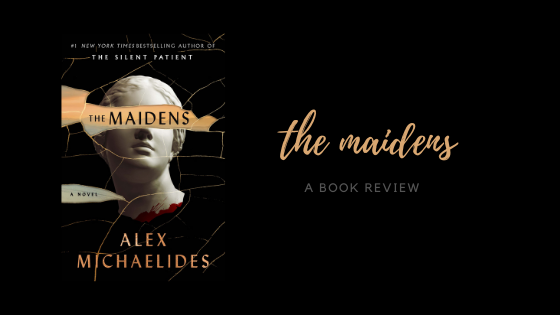 Edward Fosca is a murderer. Of this Mariana is certain. But Fosca is untouchable. A handsome and charismatic Greek Tragedy professor at Cambridge University, Fosca is adored by staff and students alike - particularly by the members of a secret society of female students known as The Maidens.

Mariana Andros is a brilliant but troubled group therapist who becomes fixated on the Maidens when one member, a friend of Mariana's niece Zoe, is found murdered in Cambridge.

Mariana, who was once herself a student at the university, quickly suspects that behind the idyllic beauty of the spires and turrets, and beneath the ancient traditions, lies something sinister. And she becomes convinced that, despite his alibi, Edward Fosca is guilty of the murder. But why would the professor target one of his students? And why does he keep returning to the rites of Persephone, the maiden, and her journey to the underworld?

When another body is found, Mariana's obsession with proving Fosca's guilt spirals out of control, threatening to destroy her credibility as well as her closest relationships. But Mariana is determined to stop this killer, even if it costs her everything - including her own life.

I am so excited that I finally managed to get my hands on one of Alex Michaelides's books. I have been dying to read on of his books since The Silent Patient was released a while back. I'll be honest and say that I have no idea what this book is about besides that it has dark academia themes and that it is a thriller. And honestly, that is more than enough for me.

Thank you to Libro.fm and Harper Audio for providing me with an advanced listening copy of this book! Just a quick disclaimer for those reading this review, I have received this book for free. Please note that this does not affect my opinions at all. All thoughts are my own.

Overall, I found myself really enjoying this audiobook. I liked the voice actor's voice and the way in which she narrated Mariana's perspective. In the occasional chapter featuring what we can assume is the killer's perspective, the voice actors deep voice contrasts Mariana's voice really well. I did think that the male characters within this book were a little obsessed with Mariana, with the exception of the head detective on the murder investigation. It seemed as though every male character that Mariana came into contact with wanted to date her. This did throw me off of the book a little bit. But the bit that caused me to stick with the book was the psycho-analysis and the mystery behind whether or not Edward Fosca was the killer. I'll be honest and say I had my money on someone completely different.